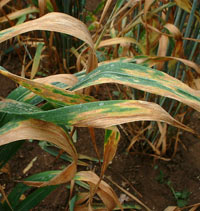 The more highly resistant septoria required 2.5 to 10 times higher doses of triazole fungicides in laboratory experiments to give similar levels of control to the much more common moderately resistant strain that dominates the UK population.

The sample, taken in Lincolnshire by The Arable Group, only contained a low proportion of the highly resistant septoria, Stuart Knight of TAG said. “We were not expecting to find it widely at this stage, but it shows further monitoring will be very important.”

There had been no problems with field control of the disease at the site with triazole fungicides, he said.

That wasn’t surprising, he said. “Firstly, we don’t know whether the strain will be more difficult to control in the field, and even if it was, at such low levels, the rest of the population would still be controlled so we would be unlikely to see anything visually. Added to that the septoria pressure last season wasn’t very high.

“The same is true in France, where Arvalis hasn’t seen any problems in the field.

“I wouldn’t think this will mean huge changes to programmes for next season, but it is a significant finding. If the strain becomes dominant in the population it could cause potential problems with controlling septoria.

“But we are a million miles away from that at the moment.”