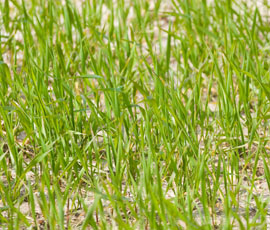 The risk of take-all infection in second or third wheats is directly linked to the amount of fungus remaining in the soil after the first wheat is harvested, research shows.

But results from field trials carried out by researchers at Rothamsted Research showed the amount of infection varies according to the variety when grown as a first wheat.

The same nine wheat varieties were analysed in each year of the four-year trial and big differences were seen in the percentage of roots infected.

The difference between the lowest and highest inoculum building varieties, Cadenza and Hereward respectively, was 44%.

However, most varieties used in the study are not currently grown and further research is required on the inoculum build-up of varieties on the current HGCA Recommended List for winter wheat.

But the research demonstrates the potential of growing certain varieties as a first wheat crop to manipulate take-all inoculum levels in the soil, says Professor Kim Hammond-Kosack.

“Growing a low-building cultivar, such as Cadenza, as a first wheat crop can be used to manipulate take-all inoculum levels in the soil, resulting in better yields from the second and third wheats crops,” explained Prof Hammond-Kosack.

“Yield increases of up to 2t/ha in second wheats have been observed.”

“We are hopeful this discovery can be commercially exploited because our genetic analyses have indicated two chromosomal locations that may be responsible for the control of the lowTAB trait,” she added.

Rothamsted PhD student Vanessa McMillan, who has been investigating inoculum build-up under different varieties, said initial results suggested this trait was also present in some of the varieties on the current National and HGCA Recommended List.

Further field and molecular work on this trait is ongoing within the Wheat Genetic Improvement Network.

Mr Beeney, who has been involved in many second wheat trials, said growers should consider cultural control methods to reduce take-all.

“Seed treatments such as Jockey (prochloraz + fluquinconazole) or Latitude (silthiofam) in second wheats can decrease take-all and increase grain yield,” he said.

“Applying either Amistar Opti (azoxystrobin + chlorothalonil) or Fandango (prothioconazole + fluoxastrobin) at T1 can also reduce the severity of take-all infection.”