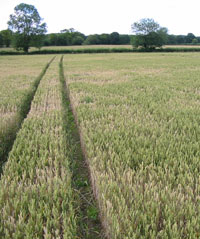 Results from trials assessing the relationship between a take-all soil test and the development of the disease in the following crop suggest the DNA test could be useful for growers wanting to predict likely take-all impact.

A joint HGCA/Bayer project found the Australian-developed PreDicta B test showed a reasonably strong correlation with the amount of take-all showing in the following crop, Richard Gutteridge of Rothamsted Research told the HGCA disease workshop.

PreDicta B’s advantage over the Rothamsted-developed bioassay was that it took just two weeks to produce a result.

“It means if you take samples in mid-July, you could have the result before harvest, and help growers more accurately assess the risk of take-all in the following crop,” he said.

“The key is for there to be moist soils at the time of spraying, or rain shortly afterwards that helps wash the chemical down to the root zone.”

Dry conditions at application and afterwards were the worst conditions from which to see a response, he said.