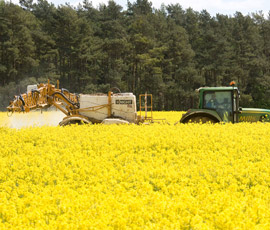 Tackling blackgrass in oilseed rape offers growers a chance to stay one step ahead of this troublesome grassweed, which they are being urged to control when it is still small.

Almost perfect growing conditions are accelerated growth of both oilseed rape and blackgrass, but users of key oilseed rape herbicide propyzamide need to hold fire to get the best control.

This active ingredient used in Dow AgroScience’s Kerb Flo 500 and the newly launched AstroKerb, which also contains aminopyralid, is normally only applied from early November onwards when conditions are favourable.

Dow’s oilseed rape agronomist David Roberts say the soil moisture deficit should be 50mm and falling, while soil temperature at 30cm should be 10C and falling so that the residual herbicide is slow to break down and gives longer persistence in the soil.

“To make the most of our products this autumn, we recommend blackgrass plants should be treated when they are small and, ideally, before they tiller. However, the temptation to go early should be avoided,” warns Mr Roberts.

“Where conditions are ‘warm’ and/or where blackgrass infestations are severe, higher rates of application should be used,” he adds.

Oilseed rape growers can time herbicides by using their postcode to check whether soil temperature and moisture are at the right levels.

Those looking to use Dow AgroSciences’ post-emergence residual weedkillers Kerb and AstroKerb can use this system to be spot-on with their spray timing.

Growers need to enter their postcode into Dow’s LifeCycle website the system, which uses Met Office data to indicate if conditions are right for spraying.

The system uses traffic lights, so red means conditions are not right, amber alerts growers to be ready to apply, and green is the signal that it is right to consider an application.

Mr Roberts says trials carried out in Germany show Kerb is formulated to penetrate even heavy canopies and reach the soil, with results showing minimal difference in plots with thick or thin canopies.

Finding the perfect partner to hit the blackgrass will also be important, with an early application of graminicide such as Laser (cycloxydim) helping achieve optimum control. Mr Roberts advises an application in a sequence or as a tank mix.

This can also benefit scenarios where blackgrass has come from a greater depth of 5cm in the soil profile, past the region in which propyzamide is most effective.

Mr Roberts says there have been concerns over some of the metazachlor-based pre-emergence sprays and their efficacy in the dry autumn, and suggests growers should consult their agronomists.

“This is where AstroKerb can help, though, giving good control on the broad-leaved weeds such as the common poppy, mayweed and chickweed,” he says.

Propyzamide and carbetamide are the only two herbicides to which blackgrass has not shown any resistance, so are vital tools in the growers’ armoury.

However, these and others such as metazachlor and clopyralid have come under scrutiny from tighter regulations regarding pesticides getting into watercourses, so better stewardship of these ingredients is vital.

Senior biologist at Dow, Andy Bailey, says it going to take a unified effort in order to prevent any future restrictions.

Research carried out by Dow has shown that non-inversion cultivation techniques and buffer strips will go some way towards keeping propyzamide in use.

Dow AgroSciences has funded independent research at two separate locations – the Game and Wildlife Conservation Trust’s Loddington estate and at the University of Newcastle’s Cockle Park farm. The work carried out at Loddington looked at two establishment techniques, ploughing and non-inversion on sloping land.

This ultimately showed the benefits of using a buffer strip, says Mr Bailey, who states the use of a 6m strip, significantly reduced run-off.

“The width of the strip needs to be varied according to the slope. The steeper the slope, the wider the buffer strip,” he explains.

At Cockle Park, three different establishment techniques were trialled on a slope of 2%: plough and power harrow to 20cm; a single pass, tined cultivation at 22cm depth; and light disc and press to 10cm.

“Most drain flow and surface run-off came from the ploughed land. Least flow of propyzamide to drains occurred from min-tillage, but there was little difference in either non-inversion technique when it came to surface run-off,” explains Mr Bailey.

Finds out more on timing your herbicide using your postcode