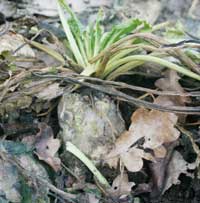 Technical help to cope with the fall out from this year’s disastrous sugar beet harvest was on hand at the first BBRO winter conference. Mike Abram reports

Ideally it needed doing by the end of March to allow time for a following crop to be established, which would help dry out the soil ready for further remedial action post-2011 harvest, he said.

Potentially there was a conflict between waiting for drier conditions in which to plough to minimise the risk of creating anaerobic soil conditions and the development of toxins harmful to the following crop, and the need to establish a following crop in time for it to be successful, he noted.

“But the priority has to be to plough in good conditions.”

On peats, sandy loams and lighter soils, his advice was to disc twice before ploughing to break up beet, increasing the surface area for bugs that will decompose the beet to work on.

Sandy clay loams and heavier soils would take longer to dry out and, therefore, growers were more likely to create anaerobic conditions when ploughing in beet on them, he said. “Again, disc twice and then plough or you could use a heavy tine/disc implement to mix beet in with the soil.”

Don’t leave land fallow this season, he stressed. “You need to get a crop in to dry out the soil, even if it is spinning on a mustard crop to suck up moisture.”

Spring barley was the best option as a following crop, he reckoned, although nitrogen would need careful management.

“Decaying beet will lock up nitrogen initially as the bugs start to work, so spread 80kg/ha of nitrogen in the seed-bed.”

During the season watch crop colour to judge whether further N was required, rather than use a soil mineral N test, he advised. “N will be released later as the beet degrades, but it could be slow. Indeed you could see more N released in year two.”

Remedial action was also likely to be needed after the following crop was harvested, he added. “Use a spade to see how deep you need to go, but don’t set the sub-soiler too deep, otherwise you will just cut a slit through the compacted layer. It needs to be set just one or two inches below the compacted layer.”

• For more on the sugar beet crisis, see our dedicated web page at www.fwi.co.uk/sugarbeet including a video on how it is affecting Suffolk grower James Black. Also have your say and read other people’s views on our website forums by visiting our dedicated webpage