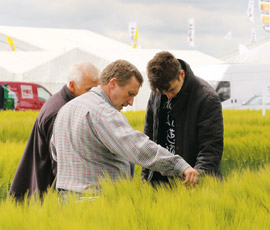 Growers were urged to be more resourceful as pesticide efficacy falls with no new chemistry in the pipeline and also move away from tight rotations of autumn-sown crops.

Blackgrass resistance is so widespread growers were urged to think again as there are no new wonder herbicides set for launch while disease control is becoming more complex.

“There is a risk in piling on ever more herbicides to control blackgrass and hope that some new chemistry comes along,” Dr Moss told Farmers Weekly.

Blackgrass resistance is seen in virtually all key herbicides, particularly those used post-emergence, and he said growers were being forced into looking at cultural controls.

He added that no new herbicides were likely to become available in the near future while some existing weedkillers may be withdrawn due to tighter regulations.

His work suggests that a very high 97% level of control is needed just to stop blackgrass infestations getting worse due to the weeds left behind and older seed hidden in the soil.

He suggested achieving such a level of control is a challenge with herbicides alone, so growers will have to use more non-chemical control methods in the future.

“The performance of post-emergence sprays has sharply declined so there is even more emphasis on pre-emergence and with that comes a concern for crop safety.

Fungicide expert Bill Clark said what had happened with blackgrass is starting to be seen in disease control with more and more complex treatments needed.

“Blackgrass control used to be out of a can, but growers realised higher and higher doses would not work,” said Mr Clark, commercial technical director at NIAB TAG.

He said mixes of fungicides were needed to control diseases as the mainstay of the fungicide armoury, the triazole, were losing their efficacy and now needed to be used largely in mixtures.

“We now need a three-way mix to get the same control that was achieved with a straight triazole some 10 years ago,” he said.

He added that growers now need to add a SDHI fungicides and a protectant like chlorothalonil to give the same effect as a triazole alone.

Others such as Lin Field at Rothamsted highlighted increased resistance showed by grain aphids to pyrethroid insecticides, which leave growers fewer choices for control (see p60).

This comes on top of the EU’s two-year ban on three neonicotinoid pesticides, which come into effect on 1 December.

The major impact will be seen on seed treatments for oilseed rape and is likely to lead to more difficult control of a range of autumn pests.

The EU banned the pesticides due to their possible link to damaging bees, but the HGCA said the move may cost growers over £72m (see p65).

Very tight crop rotations are also a cause for concern with a resultant decline in yield of crops such as oilseed rape, and growers were urged to move to larger gaps between crops.

“Growers are trying to cheat the system, and they can only do that for so long,” he said.

He added fungicide control of the soil pathogens responsible for the yield decline, olpidium and pyrenocheta, were being examined, but suggested a five to six-year gap between oilseed rape crops produced a much reduced levels of the pathogens compared with very narrower rotations.

Velcourt, which farms 54,000ha, grows oilseed rape crop only one in every five years to give some control of these soil-borne pathogens and other diseases.

Richard Summers, head of breeding at French breeding group RAGT, was not optimistic that plant breeding could ride to the growers’ rescue with a big leap forward in yield.

He pointed out that plant genetics has led to a 0.5% improvement in yields each year, but this was not enough to break out of the current wheat yield plateau, and about 90% of yield improvement in the future is expected to come from genetics.

“We will improve yields, but not enough to reach targets to feed the world,” Dr Summers added.

Catch up with all the news from Cereals 2013