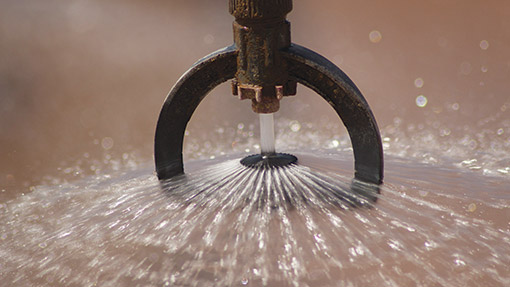 Heading north-west on Texan Highway 84, the road cuts through the small town of Post before climbing long and straight towards a cloudless horizon.

The gently nodding oil “pump jacks” and vast cattle ranches of the Rolling Plains to the south suddenly give way to the vast, flat fields of the Southern Plains.

The landscape is now dominated by a patchwork of field upon field of centre-pivot irrigators that water 49ha in a circle below them.

Since the time of writing, growers in the Plainview area have received about 30mm of rain, which has been disastrous for the region’s cotton.

Agronomist James Todd says that is way too much rain for cotton crops and about 60-70% of established area has been lost in the extreme conditions.

“Most farmers are frantically trying to replant the lost area with corn or grain sorghum. But despite losing so much of our crop, farmers remain thankful for the rain,” he adds.

But the water that feeds them is fast running out and combined with the worst drought on record, growers in the area are being forced to change their practices to survive.

Rocky Buckner (pictured below) tells Farmers Weekly that very little rain has fallen on his 1,296ha farm just south of Plainview, Texas, since September last year and it’s the fourth year of such dry conditions.

“This year has been an even drier start than 2011, so it is getting real desperate now,” he adds.

The intensive irrigation of crops in the area has been possible because much of the High Plain sits above the 450,000sq km Ogallala aquifer, which spans eight states, from Texas in the south to Wyoming and South Dakota in the north.

Some areas of the aquifer are now depleted from extraction for agricultural and other uses and it is estimated it would take 100,000 years or more for these areas to replenish – meaning that farmers are effectively mining the water.

The area around Plainview is over one of the shallower layers of the aquifer and it’s believed there may only be about 15 years left before the water runs out.

“We have already lost about 30% of our pumping capacity despite drilling extra wells, which is a really bad situation.

“We’ve lost pressure as the water level has gone down and sometimes a pump can only run three to four hours before it is too dry. Like a sponge, you have to let the well soak up the water again before coming back,” says Mr Buckner.

“We used to water everything, but we had to quit corners as our pumping capacity decreased.”
Rocky Buckner

His previous pumping capacity of 3,200-3,600 litres/min could have maintained crop yields in a dry time, but now the capacity of 1,400-1,800 litres/min requires rain at the right time to support the irrigation.

In this region, “cotton is king” and Texas leads the way in US cotton production, producing 25% of the national crop over more than 2.43m hectares.

It’s Mr Buckner’s primary crop and he would hope for a yield of four bales/acre – each bale weighing 218kg – with average annual rainfall. In the drought he can only hope for closer to two bales/acre. 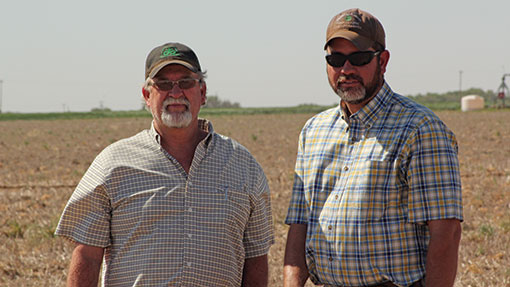 With such pressure on water supply and crop yields, farmers are adapting their practices to become much more efficient with the irrigation they use.

Under the circular centre-pivot irrigators, corners that cannot be reached were planted with cotton or corn on ridges and flood irrigated on Mr Buckner’s land.

“We used to water everything, but we had to quit corners as our pumping capacity decreased,” he explains.

“We also used to plough and rip [deep sub-soil] everything too, but you lose so much moisture and we have moved to no-till.”

Trash is one of the most important resources for Mr Buckner now, being kept on the surface to retain moisture and also help prevent wind erosion or “blowing”.

On the advice of his independent agronomist James Todd, wheat has also been incorporated into the rotation, despite the crop not being as profitable as the staple crops of cotton and corn.

Wheat is a thirsty crop and growers struggle to get enough water onto it to achieve good yields, with 4-4.5t/ha expected under the pivots.

A current price of about £130/t struggles to justify the investment in irrigation, nutrition and crop protection, but what Mr Buckner’s following cotton crop gets out of it is what really gives it value.

“We’ve learnt that the stubble keeps moisture in well and I reckon it contains the equivalent of 6-8in [15-20cm] of irrigation water in the soil, allowing us to use one-third less water on our cotton,” says Mr Buckner.

In addition to the change in cropping, Mr Todd explains that the nozzles on irrigators have been changed to low-energy, precision application (Lepa) nozzles.

They work by producing a narrow stream of water that wets just 50% of the soil surface – rather that 100% using sprinkler nozzles – reducing evaporation and increasing water use efficiency.

“We have struggled with cracking during the drought though, which is a worry as you lose more moisture from deeper in the soil profile.

“Because of that, we sometimes have to go back to sprinklers to close those cracks up as quickly as possible, but most of the time the Lepa system is helping us save water,” explains Mr Todd.

Across Hale County from Mr Buckner, Michael Mathers (pictured below) farms 2,834ha with his son Garrett and they’ve also had to adapt their farming system to declining irrigation water and drought.

About 1,010ha of his land is now in the Conservation Reserve Programme (CRP), which encourages growers to establish vegetative cover instead of crops.

“Previously, 100% of our land was watered and that has now been dropped to about 35-40%. We even plant skip rows and water in between where wells are weak.

“Despite that, our yields per acre have still been going up due to improved varieties and more efficient husbandry,” says Mr Mathers.

There are not many growers in the area who aren’t using GPS guidance to make their machinery operations more efficient. However, to ensure inputs such as water and nutrients are being used efficiently, farmers such as Mr Mathers are going a step further.

“Previously, 100% of our land was watered and that has now been dropped to about 35-40%.”
Michael Mathers

He has invested in an Orthman 1tRIPr Strip-Tillage cultivator that works 16 bands at 76cm centres, leaving the majority of the soil undisturbed.

The machine also tows a cart behind it full of a liquid fertiliser blend that includes phosphate, nitrogen and zinc, which is injected in the strip at a depth of 15-20cm.

The RTK guidance system that is used then allows Mr Mathers’ corn and cotton drills to plant seed into the cultivated strips.

“It’s all about trash management to stop blowing and conserve moisture and getting the nutrition where the crop needs it means healthier plants. Those healthier plants are also much more efficient at using water, too,” explains Mr Mathers.

“We just have to adapt and do the best we can with the resources we have.” 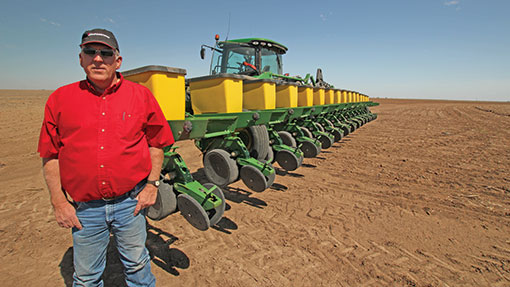 Soil mapping is becoming increasingly common on arable farms in the UK and the same revolution is happening in the USA, but for Kevin Riley and his brother Jodie (pictured below) the driver is again the lack of water.

Farming 1,555ha near Springlake, directly east of Plainview, in Lamb county, the partnership grows corn, sorghum and wheat for silage under 24 irrigators.

Soils on the High Plains were thought to be extremely uniform – varying from clay loams to sandy clay loams – but since having their soils scanned by an electro-conductivity scanner, Kevin Riley has been surprised.

“We rely on irrigation, so we need to use that water as effectively as possible and using smart technology will be the key to survival as the water levels go down.”
Kevin Riley

“They [the soils] aren’t as uniform as we thought and we’re hoping to use that information to vary nutrients, seed rates and varieties – for example, using corn varieties on areas that are less able to hold water,” explains Mr Riley.

Under the guidance of precision farming expert and agronomist Olan Moore, they also plan to combine information from the scanning with yield maps, soil sampling and aerial spectral signature photography of crops to target inputs and identify problems such as pest and disease hotspots.

“We rely on irrigation, so we need to use that water as effectively as possible and using smart technology will be the key to survival as the water levels go down.

“Direct support payments have gone, so the savings on seed and fertiliser are a bonus too,” adds Mr Riley. 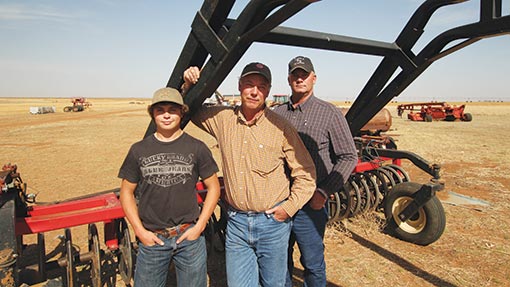