Manufacturers use high-tech research and testing methods to refine fertiliser spreading mechanism designs with the aim of achieving a spread pattern that is as accurate and even as possible.

But output from even the most forgiving mechanisms can all go to pot when inconsistencies in the material being spread and changeable weather conditions through the day bring subtle changes in flow characteristics.

One option is to use a positive feed system, such as the belt delivery arrangement on KRM Bredal-mounted spreaders. The other – and one that brings other benefits too – is dynamic calibration; a means of regularly checking the spreader is applying fertiliser at the rate it was asked to do when set-up first thing.

For that, the spreader’s electronic control system needs to calculate the rate of flow from hopper to discs. The solution usually comes in the form of one or more load cells located in a position that provides a regular stream of “weighing events” no more than a few seconds apart.

The control box “brains” of the system can then use this data to calibrate the system to deliver the required rate at the start of the spreading operation and then identify any flow variations that affect the application rate and adjust the hopper outlet accordingly.

Manufacturers will rightly argue a case for their particular set-up. One or two weigh cells located between the main frame and an integral mounting frame is the arrangement used on the Amazone ZA-M, KRM-Bogballe L and M series, Kuhn Axis, Kverneland Accord CL, Reco Sulky DPX and X series, and Vicon RO-M spreaders.

The Tulip Centerliner SXC Centermatic from Teagle and AM Phillip Agritech has a separate single-cell weigh frame that can be used with other implements. And a multiple weigh cell installation supporting the hopper is used on the Kverneland Accord Exacta TL and Vicon RoaFlow RO-XL.

An altogether different approach is employed on the Kuhn Axera. It uses the Electronic Mass Control (EMC) system to calculate fertiliser flow rate by monitoring the pressure of oil in the hydraulic circuit that drives the spreading discs.

Any change in the flow of fertiliser to the discs is reflected in the oil pressure needed to drive them, and so a correlation between pressure and application rate can be calculated.

Regardless of the “weighing” system used, operators can usually choose to prompt the system to perform a calibration check during the normal spreading routine or they can simply leave it to the controller to automatically check every so often that all is well.

Repeated calibration checks will ensure a consistent application rate is achieved regardless of changes in fertiliser bulk density – both within batches and between different batches of material.

It will also take account of the changes in flow characteristics that can arise when ambient conditions change during the day. Fertiliser applied on a chilly, dewy morning will flow more easily once the sun comes out. Likewise, fertiliser will flow differently if the weather turns damp and overcast after a bright morning.

Both situations will likely need a small adjustment to the calibration setting to keep the rate precisely on track. An automatic dynamic calibration system will make any fine-tuning adjustments needed and help achieve best possible accuracy.

For many operators, the convenience and time saving that comes from a calibration process that demands little more than the press of a button is reason enough to opt for one of these top-of-the-range machines. After all, a lot of ground can be covered by a high-output spreader in the time it takes to work through a manual procedure.

But add the potential for optimum use of fertilisers – especially those with inconsistent flow characteristics – and the appeal becomes all the more compelling.

The good news for many growers is that this technology is now filtering down from the upper echelons of fertiliser spreader models to smaller, less costly machines.

With list prices starting at a little over £10,000, these machines make advanced on-the-go calibration technology all the more accessible. 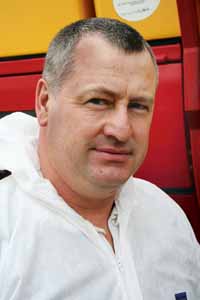 With an enthusiasm for the use of precision farming technology to optimise inputs, it was all but inevitable that grower John Porter would purchase a self-calibrating machine when it came time for a change of spreader.

GPS auto-steering, soil-type mapping, variable-rate sowing, N Sensor regulation of nitrogen and growth regulators, and variable-rate phosphate and potash application. These are the different precision farming technologies being applied to 580ha of arable crops at West Newton near Hull, Humberside.

“The whole farm is now sown using variable seed rates in each field, the aim being to get crops as even as possible and bring up the average yield across the farm,” says Mr Porter. “Accurate fertiliser application across different rates is all part of the precision approach.”

Being able to get around crops in a timely fashion means cutting out anything that wastes time – so a spreader that can calibrate itself when setting off in the morning and regularly checks progress as the day goes on is a definite attraction.“

And it’s something that does need doing; changes in humidity definitely have an effect on fertiliser and the way it flows, especially materials such as ammonium nitrate and urea,” he points out. “When the weather’s damp, the fertiliser runs a bit slower; and when the sun comes out and temperatures warm up, it runs a bit faster.”

Years ago, he recalls, putting on Nitram with a manually-set spreader involved either ignoring the variation in application rate or stopping to re-calibrate and adjust the machine, often two or three times a day.

Nowadays, with a high-capacity machine capable of covering a lot of ground, stopping to re-calibrate soon eats into productivity. But with a machine such as the Kuhn Axera H-EMC that Mr Porter now operates, that is no longer an issue.

Like other spreaders with self-calibrating capability, it monitors the flow of material on to the discs and automatically compensates for any variation by opening or closing one or both of the outlet slides.

That means it can not only compensate for variations in flow rate caused by climatic conditions, but also for variations between bags or batches of fertiliser.

“We’ve all had them,” says Mr Porter. “You get some consistent material and then a bag or two that doesn’t hit the mark. You can see the difference on the spreader’s control display because it shows the setting for each slide.”

As with all new technology, it is not always easy to trust what the system is doing, especially when the settings change quite significantly. “But from experience to date, I now feel confident the equipment knows what it’s doing,” says Mr Porter. “I can get on with the job knowing the fertiliser’s going on consistently at the rate I want.”