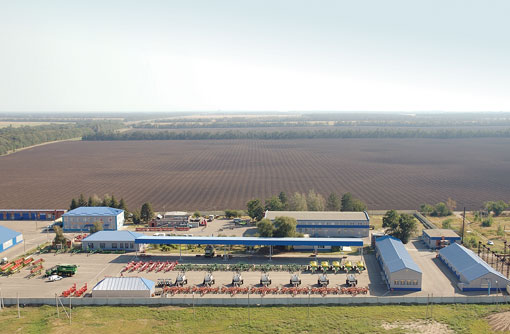 Russia has the potential to double its grain output, which could have implications for UK growers now it is a member of the World Trade Organisation. Andrey Oleinik, managing director at one of Russia’s biggest farming operations, explains how this can be achieved

What are the key crops grown in Russia?

What is the average farm size and is there a move to fewer, larger arable farms?

The average farm size is 150ha and this is generally considered to be the optimum size in central Russia. In some other regions of Russia the farms tend to be larger. We have not experienced a major shift to fewer, larger arable farms, but there have been structural changes in cropped areas. One crop is now often grown on three or four neighbouring farms (block cropping) allowing us to increase our machinery productivity.

What are the key challenges facing Russian growers?

We are experiencing an increase in our average temperature, uneven rainfall and in spring we frequently face hail storms, hot winds and dust storms. This has led to increased risk as it makes planning very difficult

Unfavourable weather in 2012 meant the Russian cereal crop declined by almost 25%. However, Russia’s sheer size and variety of climate zones means agricultural production can, to an extent, be future proofed. Production can relocate from the south to other regions in the event of significant climate change in the future.

What potential is there for raising Russian production?

Russia has the potential to double its grain harvest. The country has 115m hectares of agricultural land, of which 25m hectares are idle. I think we can reap between 150-170m tonnes of grain, compared with 85-90m tonnes in recent seasons, by putting it into use, introducing new production methods and better management systems.

By 2012, Russia had become the world’s fifth largest wheat exporter and our land availability means there is further room for growth.

Is there much overseas investment (buying of land) such as from the UK?

No, there is not, despite the fact it costs as little as €1,500-2,000/ha (£1,260-1,680/ha). There are only a few examples of foreign companies investing in Russian agriculture. However, thanks to the World Trade Organisation accession, we will start to see foreign companies entering the market with cutting edge technologies and investment.

Do you see Russia becoming the world’s number one cereal producer? And what role will it have in meeting rising global food demand?

Russia has 25m hectares of uncultivated agricultural land, giving it the potential to become the world’s number one cereal producer. This would allow Russia to help bridge the global gap between food supply and rising demand.

The world’s other large producers have minimal, if any, land to open up and are already operating very close to capacity. Climate change is reducing the supply, while demand is being fuelled by changes in consumption and a rapidly growing population. Most scientists agree that the earth’s climate is heating up. Climate change has been connected to a variety of extreme weather events, including flooding and droughts.

The 2012 US drought was the worst they had seen since 1956. The Bank of America and Merrill Lynch’s (BoAML) report Global drought – opportunities and risks, published in October 2012, suggested that such drought conditions are “the new normal”.

Research by BoAML predicts that food demand could increase by 40% by 2030 and could double by 2050. This demand, driven by a growing population and increased consumption, will require companies globally to increase productivity and bring new land into cultivation.

In recent years we have seen staple food prices soar. Increases in grain, maize and rice prices in early 2008 led to social unrest and riots across Africa, South America and Asia. Although the prices fell again during the global recession later on that year, they have continued to climb steadily throughout 2009, 2010 and 2011.

Russia’s sheer size, and the diversity of climate types across the country, means that production can be shifted as conditions in one part of the country becomes less conducive to agriculture, but conditions improve elsewhere. This resilience makes Russia a comparatively safe bet when it comes to agricultural investment and makes its development important for developing resilience against climate change in the wider agricultural sector.

Are there any moves to use the 25m hectares of unused tillable land?

No, not yet. Sadly, a lack of commercial and political desire for reform has left the huge potential of Russia’s agricultural sector unrealised. To move land back into productivity, Russian farming requires a complete overhaul which cannot be achieved without state support.

A state programme to lease agricultural vehicles to companies would overcome the reluctance among private companies to invest in essential work to place land back under cultivation – uprooting trees and rotovating uncultivated land.

What do you see as the key export markets?

At the moment China, in particular, is becoming an increasingly important trading partner. China is increasing its purchasing of wheat and soya bean, from the far eastern Russian regions.

Is technology increasingly being used on farms, such as precision farming?

Precision farming came to Russia about eight years ago. It is being implemented slowly because of the high costs involved. We expect it will develop as soon as it becomes better value for money. We use some elements of precision farming – such as navigation on combines and cultivators.

In 2011 and 2012, Kuban Agro entered the top five of Russia’s most efficient land users and its yields were the highest among the top 30 agriculture companies in Russia. We achieve these higher yields by ensuring farming operations from cultivations to harvest are on time and thorough.

With new technology, we first test it for three years before we start implementing it. It allows us to benefit from the technology and to avoid any unnecessary risks. We are also collaborating with specialists from foreign companies and Russian scientists.

However, 6.5t/ha is the yield limit for the Krasnodar region and Russia in general. These are the best results we can achieve in such large areas and they can only be improved by implementing irrigation techniques and increasing fertiliser use to levels which make wheat growing unprofitable.

The future of farming in Russia

Andrey Oleynik is the managing director of Basic Element’s agribusiness, one of Russia’s biggest farming operations and has more than 20 years’ experience working in the Russian agricultural sector. The Basic Element group is owned by Russian tycoon Oleg Deripaska.

Basic Element has 109,000ha of farmland in southern Russia, in the Volga region and the Moscow area. It plans to triple its area to 300,000ha by 2016 by buying existing farms and undeveloped land in Siberia and the Far East.