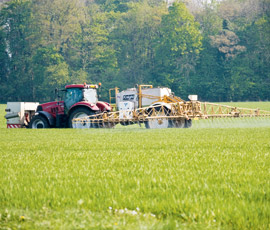 Cereal growers are being urged to persist with their thin backward winter crops as they will respond more to disease-controlling fungicide sprays than thick ones.

The bulk of yield comes from the still-to-come grain filling stage, so keeping a lid on disease is key as crops race through their growth stages after a cold spring.

“Thin crops can yield okay provided we protect as much green leaf area as we can by good disease control and then we get good grain filling conditions after flowering in June,” he tells Farmers Weekly.

Although fungicide spend is set to be down this season from 2012 as growers skip sprays or use cheaper options, Mr Clark warns septoria and yellow rust may be a problem.

The gap between the key fungicide timings of T1 and T2 this season could be as short as two weeks rather than a more normal four weeks, meaning crops are more likely to grow away from disease.

Lower leaves become more important in thin canopies because more light penetrates through the crop, and Mr Clark points out leaf three in thick canopies contributes less than 5% of yield, but in thin crops that rises up to 10%.

“Hence, T1 sprays are still important – even in thinner crops – to protect leaf three from septoria and yellow rust,” he adds.

Leaf three should be emerging at the T1 timing – which will be early May for this season – and this new green leaf needs protection. Leaf two and the flag leaf will need protection at a later T2 spray.

He advises using a triazole/SDHI/chlorothalonil mix at T1 with the latter protectant product particularly effective at keeping disease low in the canopy.

If it turns very wet with thundery rainfall around flag leaf emergence later this month, septoria pressure could be high, while yellow rust could be problematic if cool weather persists.

One would be a curative, or play-safe policy, using a triazole/SDHI/chlorothalonil choice. For a more protective approach growers could try a less expensive triazole/chlorothalonil/strobilurin option after a T0 spray.

“Disease could still take off, depending on the weather. Last year, rain in April and May led to the worst septoria year since 1985,” Dr Ellerton adds.