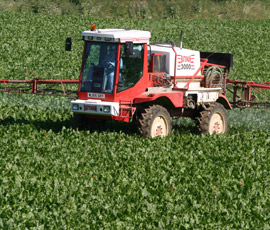 The trials were set up in response to last year’s frost-hit harvest, said Mark Stevens, head of crop protection at Broom’s Barn. “A lot of questions were asked about using three fungicides to maintain a very healthy canopy and keep the frost out.”

Previous trials work had suggested that applying a fungicide spray too soon could give a yield penalty.

But results from a late November lifted crop showed that applying the first of three sprays on 20 June, which was before any disease was showing in the crop, with the two follow-up sprays starting at disease onset, gave a yield response of 3t/ha on top of the two-spray programme.

“This contradicts the earlier work. From this data it suggests maybe we need to monitor spores going into the crop rather than waiting for disease to show itself.

“So we are going to start monitoring rust and mildew spores coming into crops, to see whether we can give you more up-to-date information.”

Applying a third spray later in the season, after beginning the programme at the traditional onset of disease timing, did not give any yield benefit, he noted.

A second trial was due to be lifted in the last week of January. “It will be interesting to see whether it gives the same results.”