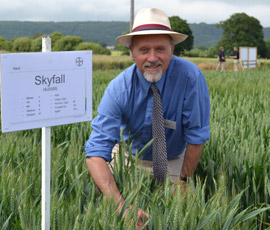 In one of the biggest fields of new winter wheat varieties trying to get onto the HGCA Recommended List in November, David Jones takes a look at the favourites for inclusion.

One leading variety specialist highlights Skyfall, Icebreaker and Evolution as the three to watch when 16 potential varieties are assessed for inclusion in the HGCA Recommended List.

“These three show the most potential to enter the Recommended List in November,” says Richard Fenwick, independent variety consultant.

The first tipped is the new breadmaking variety Skyfall from French breeder RAGT which shows potential to join Crusoe, Gallant and Solstice as a Group 1 breadmaker on the HGCA list.

With a yield of 101%, it is 5% ahead of standard breadmaking variety Solstice, with good disease resistance while the millers have said they are interested in the variety.

Some 120 tonnes of the variety is set to go through a commercial mill and undergo wide-ranging baking tests in the autumn following this summer’s harvest.

It is the first potential Group 1 variety with resistance to orange wheat blossom midge, and also has the Pch-1 eyespot resistance gene, while it is the first for a while to be an awned variety.

“If it makes the list, it could be a big variety unless growers decide they don’t like awns,” Mr Fenwick says.

All varieties were drilled very late on 25 February as part of a Bayer CropScience trial on Sentry Farming’s New Buildings Farm, near Petersfield, in east Hampshire.

The drilling was delayed by poor autumn weather, and the wheat crops were generally clean of disease with only low levels of mildew, septoria and rusts being seen.

Among the Group 4 hard milling feed wheats, Mr Fenwick picks out another RAGT variety Icebreaker as one to watch for its early drilling potential.

It offers a better yield and disease resistance than older early drilling varieties such as Grafton, Scout and Claire, he says.

“If the early drilling potential is proven, then Icebreaker looks an interesting variety,” Mr Fenwick adds.

The variety yields 105% compared with the highest yielding variety on the HGCA list, Santiago, at 107% so it would probably have to offer other advantages, such as early drilling potential, to succeed.

The third variety, which again is a Group 4 hard milling variety, is Evolution from French breeder Limagrain which is currently outyield the best performing on the list, Santiago.

It yields 108%, 1% ahead of Santiago and the next highest yielder among the potential new entrants.

He points out that the variety’s specific weight is only moderate and it is late maturing.