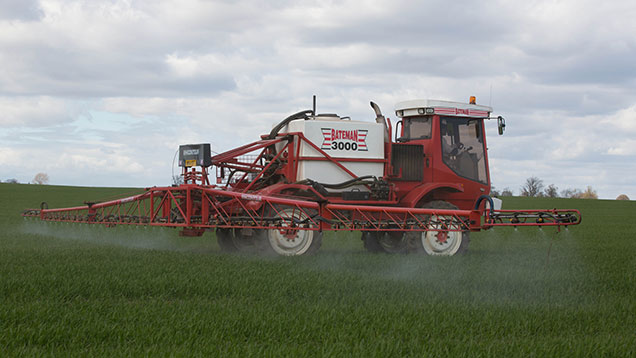 Rules for the use of popular fungicide product Folicur are being tightened to restrict its use to only once each season, while its approval for most vegetable crops is being removed.

The product containing the azole fungicide tebuconazole is commonly used on cereals and oilseed rape crops and across a wide range of vegetables.

The pesticide, which has been in used for more than 20 years, is currently going through a re-registration process conducted by statutory body the Chemicals Regulation Directorate, which is part of the Health and Safety Executive (HSE).

The manufacturer Bayer CropScience says the use of Folicur on all vegetable crops (swedes, turnips, cabbage, leeks, carrots, horseradish and parsnips) with the exception of field beans has been removed from its new label.

In addition, only one application of Folicur can be made on a crop in a season. However, this does not preclude the use of other tebuconazole-containing products during the season.

There will be changes on the timings of applications for Folicur, which are being finalised, while there are also tighter rules due for Bayer’s Prosaro, which is a mix of tebuconazole and fellow azole prothioconazole.

Tebuconazole is used to control a range of cereal diseases, such as yellow and brown rust, septoria and fusarium, and the tighter rules may prompt the use of more expensive azoles such as metconazole and prothioconazole.

Bayer says once the label has been finalised for Folicur, it does not believe the most common uses of either Folicur or Prosaro on the crops remaining on the label will be adversely affected.

Each member state of the European Union re-evaluates pesticides in accordance with agreed standards, and the HSE says resulting re-registrations may result in the restriction of a pesticide approval in order to manage the risk to human health and the environment.

In a separate move, the European Commission is looking for views on how to regulate so-called endocrine disruptor pesticides, which include the widely used azole fungicides.

The EC is examining how these pesticide may interact with the human hormone system amid growing concern about the increase in hormone-related diseases such as cancer and diabetes.