Looking for a rewarding spring-sown break crop you might not have considered recently?

Grass for seed offers a gross income of £1000-1400/ha with more possible from grazing and hay or silage, says John Fairey of British Seed Houses.

“Growing costs are less than for winter wheat, so it can produce healthy gross margins. £700-1000/ha is achievable.”

Technology advances make producing herbage seed less of a gamble than it once was, stresses Mr Fairey.

Growers with large areas potentially vulnerable to bad weather at harvest, also have the option of using a stripper header developed by Shelbourne Reynolds for use in rice. “They found it works extremely well in grass seed, doubling daily output.”

“It’s an ideal break crop, especially on farms where oilseed rape yields are declining due to tight rotations. It also provides a proper two-year break, giving the opportunity grow cereals for seed afterwards.”

Compared with other European countries, the UK is a small producer of herbage seed, with about 7000ha. Denmark grows 60,000ha. But the climate here suits the growing of high-sugar diploid and hybrid ryegrasses bred by IBERS at Aberystwyth.

“The value of these ryegrasses is recognised worldwide,” says Mr Fairey. “So there is plenty of scope for the herbage seed area to increase.

Most crops are autumn sown, but undersowing in the spring offers savings on chemical inputs and increased grazing opportunities. 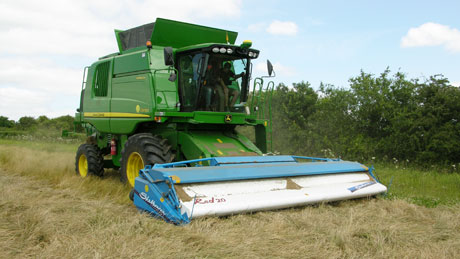 Ideally fields with heavy grassweeds burdens should be avoided. “But the main residual herbicide we use, ethofumesate, has a different mode of action to those against which blackgrass is so widely resistant.”

A key advantage is that the establishment costs are spread over two years. “You don’t have any seed or cultivation expenses in the second season. The main input is extra nitrogen.

“Yields average 1.25-1.5t/ha and generally drop by no more than 10% in the second year. But you can get up to 2t/ha depending on variety and type.

“Sometimes you can keep crops going for three years, provided you can keep them free of thistles and docks. Dock seed is especially difficult to clean out.”

Once the grass has been harvested the thrashed hay often meets good demand, says Mr Fairey. “It’s not soft meadow hay, but it’s good for horses, sheep and cattle.”

Fields may then be grazed by sheep until January.

Although farms are required to dry their crops below 14% moisture, BSH does all the cleaning.

All production is certified and grown on contract. Recent BSH contracts have included the option of guaranteed minimum prices.

“Understandably, no one is offering similar contracts for 2010 yet, and we might have to go back to ‘price to be agreed’ arrangements.”

In the meantime the firm offers a Wheat Tracker Contract ensuring that fluctuations in feed wheat price are reflected in that paid for the grass seed, he says.

Beyond agricultural grasses, demand for high-quality amenity ryegrasses and fescues is also growing. “Being slower growing, these types are ideal for spring undersowing.”

Grass seed is rewarding in the west

Philip Gorringe has produced grass seed at Lower Blakemere Farm near Hereford since the early 1970s, about a fifth of the area being devoted to it.

“If we get it right it’s the most lucrative arable crop we grow. This year we have about 230 acres, split roughly half agricultural varieties and half amenity for two companies.”

The hay is valuable feed for his 150-cow suckler herd.

The main risk is that if seed fails to meet requirements it has no other outlet, says Mr Gorringe. “Unlike wheat it has no feed value. But that’s happened to us only once – about 15 years ago.

“We combined it OK, but didn’t dry it enough. It heated up and the germination collapsed. An on-floor drier really is a must.”

“It’s a crop for those with an eye for detail, but perhaps not those stretched to the limit with combining capacity.”