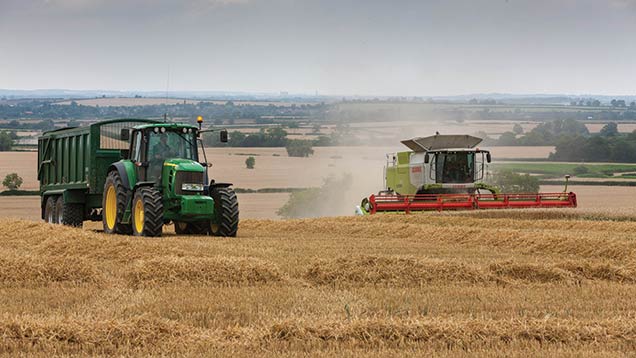 The importance of properly calculating the cost of crop production might seem obvious, but some elements of cost are easily overlooked or miscalculated. Richard Sanders of Fisher German offers some tips.

While some areas of cost are straightforward, others deserve more attention.

Even before rent and finance, these result in cost of production at:

Adding a rent of £250/ha makes the picture look quite different:

However, when including rent in cost of production, it is good practice to reduce the rent by the amount of subsidy expected, as the subsidy has the effect of increasing rents.

Taking an assumed £190/ha BPS subsidy off the rent above brings production costs (before working capital finance charges) to:

Calculating the cost of production properly helps not only with marketing decisions but also when comparing or benchmarking a farm’s costs and performance against that of other similar farms.

Beyond this it can also help in making bigger structural decisions about joint ventures, contract farming or even letting some or all of your land to others.

Where different farms are being compared, an imputed rent and finance will generally be included in benchmarking costings to allow fair comparison.

Getting accurate costs of production is also useful to consider cropping changes within the business, for example a move to spring cropping or even fallow for some.

Review of each area of cost carefully to make sure everything has been included and that shared costs are allocated reasonably:

The table assumes all seed is bought-in – home-saved seed needs to include the true cost of producing that seed ie cleaning and dressing charges, royalties. If this farm were home-saving, the estimated all-in cost of seed would be about £48/ha.

This farm example uses ammonium nitrate rather than urea. Don’t forget to include lime, usually shared across the number of years between applications, so might typically cost £17/ha a year.

A blackgrass problem will probably add about £60/ha to the spray costs shown.

This should include crop-related items such as scarers and drying costs – if you don’t have accurate records for your own farm’s historic drying costs, assume the need to dry about 3% from each crop, at a costs of £1/t for each percentage point taken out. Agronomy costs should be included here too – with most independents costing £15-20/ha, the £24/ha total miscellaneous costs in this budget is tight. Don’t forget marketing costs, weighbridge charges and levies.

With good daily record-keeping of time spent on crop-related operations, the labour split attributable to each crop should be relatively straightforward. Remember to include contract or casual labour. A sensible value should also be included for the farmer’s labour time in growing the crop – this is probably the area that is most commonly ignored but can be a significant cost – this element should relate only to manual/non-management work by the farmer.

As well as the direct costs of items such as diesel and repairs, include depreciation, machinery insurance, wearing parts, a proportion of workshop costs and electricity. A share of general farm vehicle costs such as the pick-up should also be included in this category, as well as contracting costs.

Property costs – buildings insurance, building repair and maintenance and drainage repairs should be included here on a turnover basis.

Individual items in this area of cost may add only pennies a tonne to production costs, but together they can account for £10/t or even more, so it’s important to make sure they are all accounted for here.

Where costs need to be allocated between enterprises – for example machinery repairs and insurance, also any service vehicles such as the farm pick-up, the most sensible way to do this is probably on a turnover rather than an acreage basis – the same applies for working capital costs ie the cost of the overdraft.

(On a good grade 3 arable farm with no blackgrass problem, before rent and finance and Basic Payment Scheme income. Assumes straw is incorporated).