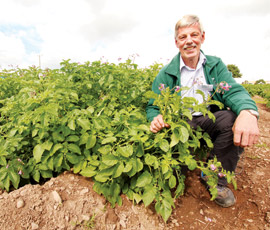 The dry summer has pushed blackleg down to its lowest levels in recent years and so potato growers are being urged to focus on best practice to ensure it stays that way.

Caused by the bacteria Pectobacterium atrosepticum (Pba), blackleg is a largely seed-borne disease that has been on the rise over the past few years.

The main source of infection is rotting mother tubers within the ridge, with the bacteria moving through the plant and soil to infect daughter tubers.

Signs of the disease in Scottish seed crops are minimal this year, creating a chance for the industry to get on top of the disease over the remainder of this season and the beginning of next.

Scottish Rural College (SRUC) potato consultant Stuart Wale said although the disease has been present this year, soils with a moisture deficit have stopped its spread.

“Last year we had saturated soils for the whole summer, meaning that the bacteria could spread easily within crops, but that hasn’t been the case this season,” he says.

“That is the other main source of infection and the dry growing period has again minimised the spread from crop to crop this year,” added Dr Wale at a recent Potatoes In Practice event near Dundee.

It has been suggested that infection from stem rots – the rotten, black stems from which the disease gets its name – are also an important source of tuber infection in growing crops.

However, Dr Wale pointed out that there is little data to back that theory and even in a high blackleg year, there is not necessarily high contamination of the daughter tubers.

“If roguing plants showing symptoms, it is not necessarily freeing the crop of the disease as late mother tuber breakdown can still infect the crop,” he added.

So what can be done this year to ensure the blackleg cycle is broken?

This will minimise any infection from aerosols and late mother tuber breakdown and even if conditions at harvest are good, Dr Wale warns that growers must quickly cool and ventilate crops soon after harvest.

He also identifies the period between the grading of the seed and the time it reaches the end users’ farms as a weak link.

“I plea for better communication between seed merchants, handlers and buyers to ensure the seed is being kept in the correct conditions throughout the chain,” said Mr Wale.