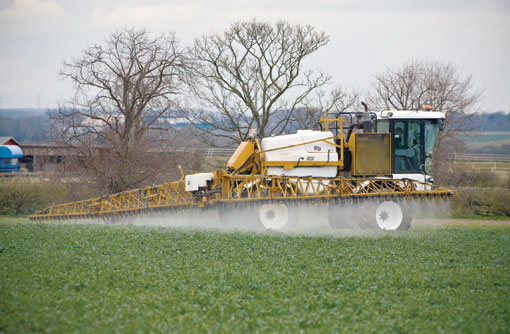 Establishing the right number of plants into a good seed-bed may provide the foundations for a high-yielding oilseed rape crop, but continued vigilance throughout the autumn and through winter is key if the optimum number of plants are to survive and thrive. Four management areas need to be considered to make excellent yields a reality.

Blackgrass is the top grassweed target for many growers. “It can cause problems if it takes hold early. And because we use different chemistry to cereals to control it in rape, we can hit difficult-to-control blackgrass hard,” says Mr Mills.

Given this year’s levels, blackgrass could take on a new importance, says Buckinghamshire AICC agronomist Luke Cotton. “We are looking at potentially large populations in rape.”

Both agronomists’ control strategies begin with pre- or early post-emergence metazachlor-based chemistry to sensitise blackgrass to follow-up treatments and to kill some broad-leaved weeds.

Other chemistry can be tailored to the weed spectrum. For Mr Cotton, cleavers and hedge mustard are key targets, so clomazone is added.

Dimethenamid-P plus quinmerac often feature as additions in Mr Mills’ recommendations, to take out cranesbill, poppies and shepherd’s purse. “If you don’t remove cranesbill at this time, you are stuck with it.”

Cereal volunteers can be a major problem, and fluazifop or propaquizafop applied early post-emergence will remove them.

A follow-up blackgrass treatment follows, usually, cycloxydim or tepraloxydim (which will take out later emerging cereals) applied when the crop has two or three leaves. But, control of blackgrass has been slipping in some areas, Mr Mills believes. “We have had target site resistance for a while, but it was disappointing last season.”

Mr Mills will extend the use of early, reduced-rate carbetamide, a technique he tried last autumn. “We’ll be using 2.5kg/ha from mid-September to replace the dim to hold and further sensitise the blackgrass. We’ll follow with full-rate propyzamide in early November when soil temperatures are declining – below 14C.”

Where blackgrass is absent, the pre-emergence metazachlor-based spray followed by half-rate propyzamide should control annual meadow grass and brome, he adds.

Charlock also needs watching. Growers who have adopted Clearfield technology will be able to control it and other problem weeds post- emergence, says Mr Mills. Otherwise bifenox, which has off-label approval, is the only choice – on well-waxed crops, he advises.

A final check from mid-January, but before stem extension, should be made for thistles, mayweed, groundsel and cleavers, says Mr Cotton. Clopyralid will take out the first three; adding picloram will also control cleavers.

Good slug control early in the crop’s life will be vital, with fields “heaving” with slugs, says Mr Cotton. “By the time you notice slug damage in OSR it’s too late – slugs nip off young plants at the stem,” he says.

Slug numbers should be assessed using trapping. For metaldehyde, a maximum of 210g active/ha is allowed between 1 August and 31 December. A split dose should see the crop through to the three-leaf stage and relative safety, he adds. Where slug pressure remains high on later-drilled, backward crops, methiocarb or ferric phosphate may be used as a follow-up.

Insecticidal seed treatments such as Modesto and Cruiser OSR control cabbage stem flea beetle and aphids such as the peach potato aphid, which transmits turnip yellows, but they do run out of steam, says Mr Mills.

“Adding a pyrethroid to the propyzamide application will control tunnelling larvae. Treat if more than five larvae are found per plant. This will also help to control aphids.”

Phoma is the key disease in the south. After the wet summer Mr Cotton will keep a close eye out for early infections, treating once the threshold of one lesion per 10 plants is reached.

Flusilazole is preferred, followed by prothioconazole if a second treatment is warranted. This two-spray approach also controls light leaf spot; a single spray may need a follow-up prothioconazole treatment in January or February.

“By the time you notice slug damage in OSR it’s too late – slugs nip off young plants at the stem,”
Agronomist Luke Cotton

Boron can be applied in the autumn as a foliar spray especially on crops on lighter or stony soils which are more at risk of leaching or high pH soils where the element can be locked up. Manganese should also be considered, he adds.

For Carl Tuer, 5t/ha is now the goal when growing oilseed rape.

This year, yields over the 320ha grown at Rocks Farm, Alnwick, settled at about 4t/ha – about a tonne down on last year, but good given the season.

The key autumn aim is to nurture plants to help yields bounce back.

“We have been planting fewer seeds to promote the right plant structure,” says Mr Tuer. “But we are leaving little margin for error, so autumn management must ensure the plants we do establish survive.”

Slugs pose a huge threat to emerging crops. “Stubble tests show pressure is just incredible this year. We’ll apply a half-dose of metaldehyde at sowing, using a pelleter on the Simba SL, and apply the second half soon after.

Once the crop has one true leaf the pressure is usually off.”

“I’m wary of going pre-em,” says Mr Tuer. “We use an Aqueel roller on the Simba, but some seed is left on the surface after broadcasting.”

A half-rate propyzamide in November is pencilled in to complete the job.

Light leaf spot and phoma are controlled using a single application of carbendazim + flusilazole in October, often applied with a second graminicide if needed to control barley volunteers.

Blackgrass is firmly in Andrew Elliott’s sights this season and, with drilling only a week later than normal despite the delayed harvest, he expects autumn management will remain on target.

Yields in recent seasons at Claydon Estate, near Buckingham, had averaged 4.5 t/ha and topped 5t/ha last year. This year, like most areas, yields are well down – the farm’s 280ha achieved about 3.5t/ha. Despite this, Mr Elliott believes 5t/ha remains a realistic overall average.

“We did everything right this season – it was the weather that refused to play ball. We are moving in the right direction, and we hope to continue that again next harvest.”

The crop has been drilled on 74cm rows behind a Simba 3.5m Flatliner. Hybrids are aimed at heavier soils, conventionals on lighter land.

“The wide rows give a great opportunity to kill blackgrass – it comes up like a lawn and we can get very good control – there’s very little crop shading.”

Slugs will be a key target this year. “We raised the seed rate average to 4kg/ha and expect to apply two lots of pellets. We can’t afford to lose any plants; we are fairly wooded and pigeons can be a real nuisance in the winter.”