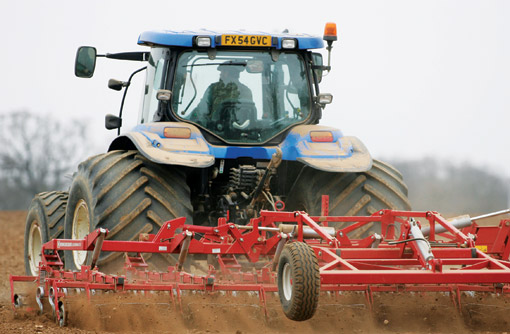 Many rotations are broken due to the winter drilling difficulties, particularly further north. Jackie Crame looks at how growers can get their rotations back on track.

There is no magic fix for correcting this year’s rotations, but growing more winter barley and being flexible over the timings of oilseed rape drilling may help speed up the process.

In the thick of the problematic season is David Martindale of Arable Alliance who is seeing a wide range, from growers with just odd fields affected to others with problems covering more than half the farm, in his area of East and North Yorkshire.

Quantifying the extent of the disruption to rotations is difficult, but he estimates that up to 10% of rotations are seriously affected, with most farms having at least one field that has suffered. The heaviest land has been affected the most, with the Vale of Pickering and parts of Holderness the worst hit.

In the Wolds and lighter areas the situation is not “too bad” compared with other areas. Here there tends to be a longer six-year cropping plan with a range of break crops, including winter rape, vining peas and potatoes. This wider range of cropping options has provided more flexibility in dealing with rotations.

“There was a lot of planning when drilling spring crops with the intention of getting a first wheat back in afterwards,” says Mr Martindale.

“Mainly spring oilseed rape and spring beans were drilled on heavier land, but also other options like linseed. Where spring barley has been sown, the tricky point will be deciding whether to sow oilseed rape, wheat or barley as a following crop.

“Everybody’s knee jerk reaction is to put fallow land into winter wheat. But if you think about the balance of the rotation there is an opportunity to get it back in hand by putting rape in.”
Patrick Stephenson

Where conditions were so bad that fields were left fallow or crops failed completely, Mr Martindale advises that this is an obvious opportunity for drilling an early, first wheat.

Fellow Yorkshire AICC agronomist Patrick Stephenson also suggests oilseed rape. “Everybody’s knee jerk reaction is to put fallow land into winter wheat. But if you think about the balance of the rotation there is an opportunity to get it back in hand by putting rape in.”

It is an ideal situation to cultivate before harvest begins for using pre-harvest cultivations to get a good seed-bed for rape. Obviously cultivations will depend on weather and the type of fallow, says Mr Stephenson, whose area includes some badly affected heavy land. “For example, is it a failed rape crop, a cover crop which has to be burnt off or maybe stubble.”

He also warns against a blanket decision to never sow oilseed rape in September again. “Soil temperature is the big governor of successful oilseed rape germination, 10C is the target to not go below. So drilling can be managed according to temperature, seed availability and ground conditions,” he says.

“In the North, soils often keep this temperature for all of September, so I would feel comfortable drilling up until the 7 or 8 of September in normal years. Last year, September temperatures were more like October.”

The anticipated late harvest means that much of the winter wheat will not come off before the spring barley, adds Mr Martindale.

Sowing oilseed rape after wheat could be very late so a lot more will now be drilled after earlier harvested spring barley. This gives an opportunity for the rape to be drilled in good time, allowing that vital, good establishment.

On fields with bad blackgrass this would also give the bonus of a double-break to help reduce populations. So the rotation may change again despite all the spring planning, he says.

Another consideration is the flexibility and durability of the rotation. For Mr Stephenson, this is where winter barley has a role because he says it can withstand very dry and very wet seasons, especially in the North. The rotation as a whole should be looked at, so there is a balance between margins and ability to adapt to the season.

Spring crops are also part of the answer as they enable problem grassweeds like brome and blackgrass to be partially tackled. If spring barley is to be followed by winter wheat, he warns that take-all could be a problem. He urges planning for winter barley after spring barley.

Wheat can follow rape or a fallow so that it can get started early.

Another tip from Mr Stephenson is to remember that if the weather deteriorates there are other options. “You don’t have to keep drilling, cultivate before Christmas and then allow the weather to create a tilth.

“Don’t ignore oats as a viable option in the North if you have missed getting rape in.

“Oats can be drilled right up until mid to end of April. They don’t require a cold snap to stimulate vernalisation,” he says.

To correct damage to soil structure, a “wait and see” approach is advocated. The advice is to not rush in with heavy machinery to break up compaction before seeing what the summer brings.

“Nature is much better at doing it. Rape, beet and even wheat roots can get through pans and draw moisture out and where there is a high clay content the soil starts to crack open.

“Get a spade and then decide on targeted remedial work where required.”

Mr Stephenson predicts that this season 70% of affected growers will have corrected their rotations.

Going into the autumn there will be some growers who still have oats and spring beans where they would not normally be and maybe some third wheats.

In block cropping systems there will be some corrections needed to get crops in the right position.

In conclusion, Mr Martindale is optimistic that most growers will get their rotations back on track this coming season, but there will be a few who will take at least another year before they re-establish their preferred cropping plan.