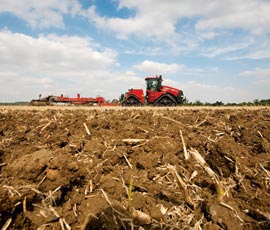 Maintaining soils that are resilient to both wet and dry weather is perfectly possible, says Steve Townsend, an independent reduced tillage adviser.

But it takes commitment from growers to move from soils that are open to the vagaries of the weather to those that can withstand whatever the elements throw at them.

“There are no soils that can’t be put right, even after the terrible year we’ve had. But patience is required – some soil types will take longer than others. You can’t do it all in one year,” he says.

For many, strategic changes will be required. “Machinery and over-cultivation have caused most of the problems we’re seeing. Organic matter has been lost and soils have collapsed,” adds Mr Townsend.

The light land Cereals site provides a good opportunity for NIAB TAG to demonstrate direct-drilling techniques and discuss their role in good soil management. A four-year trial carried out on behalf of the group’s members has given useful pointers, notes NIAB TAG’s Nathan Morris, who will be on the stand to discuss them further. A 50cm deep trench, by the edge of a crop plot, will show what happens to root growth when it hits compaction.

That’s why he is adamant that good soil structure can’t be achieved with a piece of metal. “It’s not what everyone wants to hear, but reducing your dependency on ploughs, power harrows and the like and moving to a no-till system is the best way forward.”

Behind this advice is the knowledge that it’s essential to build up the organic matter content, so soils have natural structure. “The more organic matter it contains, the better. It allows water to move both up and down the soil profile and helps soil particles stick together, so you don’t get run-off.”

Two principles should be applied before action is taken to put damaged soils right, advises Mr Townsend. “You need to check that it’s dry enough to do any planned structuring work and you must make a judgement on whether there has been yield loss.”

If yields aren’t affected, there’s no need to run out with a sub-soiler after harvest, he explains. “It’s far better to leave soils alone than do any more cultivating. Remember the current crop might be doing all that’s needed to put the soil back in good order.”

Mr Townsend (pictured above) points out that all cultivation methods involve putting the crumbs under the lumps. “The fine materials are placed down in the soil profile and are then taken further down by water. So it creates the right environment for sedimentation pans to be formed.”

Looking ahead to this autumn, Mr Townsend recommends growers go into standing crops in the summer and look at the roots. “If the roots have gone down well, it tells you the soil is OK. The crop is helping to correct any problems.”

However, if the crop is struggling, he suggests digging a hole. “Look for pans. The roots will tell you if there’s one, as they will have accumulated at one horizontal level.”

If there is an obvious pan, it will have to be dealt with mechanically, he confirms. “Set the machine to where the pan is, and no lower. And remember soils must be dry, otherwise you don’t get the required soil shatter.”

Where it isn’t possible to subsoil, agronomic measures can help, he believes. “Drill the next crop slightly earlier, so it can get away and start putting roots down while the soil is warm.

“Use plenty of nutrition to help, applying nitrogen and phosphate for the establishment phase, but stay within nitrogen application guidelines.”

Mr Townsend suggests a planned approach to reducing tillage over three to five years, should be adopted. “It’s the only way to get the natural soil structure. It builds organic matter, reduces oxidation and allows better drainage and infiltration.”

Direct drilling, straight into crop residue or stubble, avoids many of the pitfalls associated with compaction, he says. “You don’t get any smearing, especially if it rains at drilling, and the soil particles don’t move, reducing slumping, capping and sedimentation pans.”

Where slugs are a concern, he has an alternative strategy for growers to consider. “In France, they ‘drill on the green’,” he reveals. “It’s based on a theory that slugs will eat what is already there, rather than the seeds or seedlings of a new crop.”

For this reason, leaving some volunteers is advised. “Slugs eat them instead. It has worked well in the UK when it’s been done by accident, so it’s worth trying.”

Cover crops, correctly managed, have an important role in soil management, he adds. “They structure the soil perfectly. The action of the roots, pushing their way through soils, is invaluable.”

Producing sketch maps of the worst-affected areas of your farm is a good start to soil management, believes Nathan Morris (pictured), farming systems and soils specialist with NIAB TAG.

Take a fork with you, he advises. “It’s more useful than a spade. You can feel when it gets tough to push the prongs into the soil.”

Lift out the soil where you meet resistance, which is often at around 9cm (4in), he continues. “Lift it out to the depth of the tine and focus on that area of soil.”

Any sign of platey structures, or horizontal layers, is a warning, as is a blue/green discolouration of the soil, stresses Mr Morris. “And smell the soil. If it smells right, the soil is usually in good order. But a sulphurous smell is a sign of anaerobic conditions, which suggests waterlogging or damage.”

Areas where water stood during the winter indicate field drains aren’t up to the job, he suggests. “If they have collapsed and need re-doing, it’s a serious expense. But the likelihood of more extreme weather in the future means it’s probably necessary.”

Where compacted soil layers have been identified, consider remedial action. “Only work to the depth you need for a seed-bed. It’s really important to minimise the depth you go to – lifting the soil by 2-5cm (1-2in) can be enough to remove compaction.”

Overworking soil is the worst approach, he warns. “Knocking soils about leaves them vulnerable to more problems in another wet spell. They simply can’t cope with excess rainfall if they don’t have any structure.”

The natural wetting and drying process that occurs every year improves structure, but the past nine months has just been constant wetting, recalls Mr Morris. “That’s why growing a crop will help, as it draws some of the moisture out of the field.”

At harvest time, all tyres and tyre pressures on relevant machinery should be checked, notes Mr Morris. “Wider tyres will spread the load and help to minimise damage. Remember a trailer can inflict damage as much as half a metre down – it squashes soil at depth.”

Tyre manufacturers give good advice and will help with the appropriate tyre pressures and loads, he adds. “Modern tyres don’t need to be fully pumped up. Not only will they do less damage, you’ll get more wear from them.”

Time to check your pans

There are three types of compaction pans, points out Mr Townsend. Knowing which you are dealing with can help remedial action.

1. Mechanical – caused by smearing and pressing with heavy machinery

2. Sedimentation – caused by the action of cultivators putting “crumbs under lumps”

3. Oxidation – caused by crop residue being put underground into anaerobic conditions at cereals