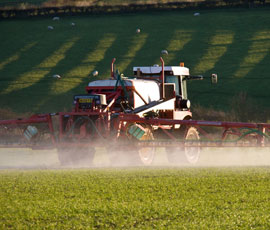 Spray stores can sometimes be the forgotten link in the chain when it comes to modernising your spraying regime or machinery fleet. But with increasing environmental pressures, and the ever-present threat of pesticide handling becoming more policed, more operators and managers are taking the plunge.

The Sprayer Operator of the Year judging panel identified several finalists that have recently changed their spray store and filling area design.

Rory Lay farms 400ha of mixed cropping and livestock in Shropshire. The arable rotation is made up of 100ha of winter wheat, 60ha of barley, 60ha of winter barley and around 16ha of sugar beet. A further 40ha of maize is grown for silage. The farm operates a 1996 Bateman RB15 with 24m boom and 2,500-litre tank.

“We had the opportunity to take back in hand another shed next to our main yard and this provided an ideal opportunity to update and move our filling area and spray store. In addition, the Catchment Sensitive Farming project started advertising a grant for spray stores which spurred us on to do something about it,” he explains.

A sum of £1,500 towards the concreting of the new store. Although this wasn’t nearly enough to complete the whole project, it did give Mr Lay and his father a head start and encouragement to get started with the project.

“We thought about keeping it where it was, and creating a bunded area and adding a roof. Because our main aim of creating a new facility was to reduce environmental risk, not having a roof wasn’t an option. If you’re still going to have drips and splashes it defeats the object of any new facility.

After careful research, he settled for a contained, lockable and insulated room. Walls consist of fireproof plasterboard, however the roof is not fireproof. “We read that by having fireproof walls and a normal plasterboard roof, it contains a fire, but allows it to burn out without exploding.”

The spray store is bunded itself and an extractor fan allows any reaction that may occur from chemicals mixing with each other inadvertently to be dispersed.

Because of the layout of the barn, Mr Lay wanted to create two entrances to the store, one to allow sprays to be delivered easily from the yard side and one to allow quick access to the filling area. Double doors measuring 4ft and 2ft wide respectively, secured by a combination padlock, allow for pallets to be put directly in the store on delivery.

In addition to the existing water tank, fed by a borehole on the farm, Mr Lay purchased a second-hand railway tanker, which has a not unsubstantial capacity of in the region of 50,000 litres.

All in all, the investment cost in the region of £10,000. “But it should future proof us from future legislation changes and enable us to up capacity.”

Handy tip: Cut foils only three quarters round, allowing them to be rinsed at the same time as cleaning containers.

“Supplying multiple retailers like Tesco, the assurance scheme, Tesco’s Natures Choice, stated that we could not continue to fill up on gravel.”

“We built the spray shed 10 years ago, but the under cover filling area was only completed this time last year,” he explains.

At one end of the spray store there is a separate office and washroom. First aid kits, eye washes, fire extinguishers and records are kept here.

“We can cover most fields, even vegetables like carrots we have to spray at 300 litres/ha, with one tank fill. Eventually, we hope to have a trailer to go on the back for spraying multiple fields.”

A 5,000 litre bunded tank, there to capture any spillages or drips, is buried outside the filling area. The spray store is a purpose built unit from C&J Supplies, is fitted with a frost stat heater and the unit is completely fire proof.

Clever touches, including fabricated frames to hold 1t potato bags with spray can waste are located within easy reach of the spraying area and the farm is on a yearly waste contract. For manganese, a separate frame has been made that can be picked up on pallet tines and positioned at the end of the spray store for handy access from the sprayer.

Locating the water tank on the top of the spray store saves space and increases flow rate, taking some pressure off the sprayer’s fill pump.

One of the next projects will be to harvest the rainwater from the potato shed roofs and collect it in a second hand tank located handily at the back of the sprayer store.

“We also aim to put a door on the filling area and a partition wall to protect the sprayer from frost damage and make the sprayer area a separate building from the rest of the shed.”

Handy tip: For a ready-made drip tray, use a grow bag tray from your local garden centre. By making runners under your pre-filling stand, it’s a quick and easy way to catch any drips.

When you’re selling to the multiples, it can be a tough call to meet their farm assurance protocols.

Having carried out a biodiversity study on the farm, Gary Adams of Mash Direct also brought into consideration how farming practices could be made more environmentally sensitive, and redesigned his spray store.

The farm grows 400ha, consisting of potatoes, carrots, parsnips, swede, cabbage, spring onions and leeks. A break crop of spring barley is also grown, some malting and some feed.

“We were working from a small store, however while we planned the new building setup we realized we could integrate a new spray store into the plans.

The area was designed to house the sprayer in a completely bunded block and was moved last year and completed at the end of 2011.

The whole area runs into a 2,000 litre catchment tank that can be pumped straight into the sprayer and reused if a spillage occurs. The spray store itself is encased in concrete, with two poured concrete walls and a concrete slab on top. A roller shutter door secures it.

Behind the shed, a 15,000 litre rainwater tank fitted with ultraviolet filter harvests the water from four sheds measuring 36.5m long by 30.5m wide.

A 76mm solid pipe kept at 2.4m along the wall feeds the water to the filling area is fitted with a flexi hose with 50mm connection.

Because of the height of the tank above the shed, natural pressure allows us to wash down the area with a smaller hose with high-pressure jet. The spray store has two tube heaters run on a thermostat to regulate temperatures to 5C.

The development has cost in the region of £20,000 – including the new spray store, water tank, concrete slabs and ancillary fixings.

“It goes above and beyond what is demanded of us but we want to be able to prove that we are improving the farm from an environmental standpoint.”

Handy tip: To get a quick assessment of what you could harvest off your sheds, click on the Met Office website where there is an app that can give you an idea of what amount of water.

For more information on pesticides and best practice, visit the Syngenta Sprays and Sprayers arena at this year’s Cereals event on 13-14 June 2012. More information at see our dedicated Cereals 2012 page.