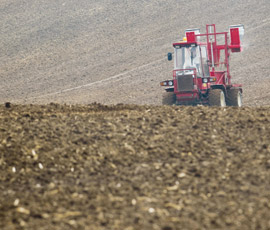 Concerns about water quality could lead to restrictions on the use of metaldehyde-based slug pellets in some areas. Louise Impey reports.

Tighter controls over the use of metaldehyde-based slug pellets are likely in high-risk water catchment areas to try and cut pesticide levels in drinking water.

Two pilot studies are being set up by water companies to help refine advice as part of a harder-hitting stance towards slug pellet use, although overall guidance for autumn 2013 is unchanged.

Farming industry body, the Metaldehyde Stewardship Group (MSG), is taking the action as the slug-control pesticide continues to be detected in watercourses.

“Within these specific areas, the plan is that no metaldehyde will be applied during the course of the year,” said Dr Paul Fogg, spokesman for the MSG.

“The high-risk areas have been identified by their topography, soil type, slope and distance to water. They are the hotspots,” he added at a recent briefing.

At this early stage, it is not clear how many farm businesses will be affected.


Metaldehyde is by far the most popular pesticide used to control slugs, the number one pest facing arable growers, and accounts for about 80% of slug pellets used on farms.

But the chemical is also the biggest pesticide issue preventing the Environment Agency from meeting the objectives of the UK government’s Water Framework Directive on water quality.

Depending on the outcome of these studies, it is hoped to roll out targeted metaldehyde use restrictions across the 80 Drinking Water Protected Areas and associated upstream Safeguard Zones, identified as being at risk of metaldehyde exceedance.

“Targeting of extra measures would seem to be the way forward and is a logical next step,” said Dr Fogg.

“It avoids the need for widespread product restrictions and keeps a range of products on the market, while giving confidence in achieving long term compliance,” he added.

Jo Kennedy, senior adviser with the Environment Agency, is in agreement with the tougher stance of employing extra measures in some water catchment areas.

“There’s no doubt that extra restrictions are needed in some catchments. If we can move to a more risk-based system, there’s every chance that we will see an improvement in the number of non-compliances,” she said.

That could involve applying less metaldehyde or implementing product substitution, she added.

Following 2012’s exceptional season, which combined high rainfall, intense slug pressure and heavy pellet use, water companies reported metaldehyde levels in drinking water catchment similar to or higher than levels seen in 2008, when the MSG was established to tackle the issue.

“That’s a shame, because a great deal of good work has been done in that time. But it shows that the system is vulnerable to external events and that certain areas will have to try different solutions,” she added.

Finding out if you farm in a Drinking Water Protected Area or upstream Safeguard Zone can be done with the Environment Agency’s interactive maps on the What’s In Your Back Yard website, by entering your postcode, she advised.

“If you’re in a catchment area where water is abstracted for public drinking water supply, then it’s really important that slug control strategies consider water protection,” she stressed.

“And in other catchments, existing measures must be implemented, to avoid any deterioration,” she added.

Looking further ahead to 2015, David Cameron, chairman of the MSG, pointed out that all metaldehyde slug pellet products will have to fulfill higher standards.

“This will mean more detailed formulation studies, new efficacy data and a minimum effective dose. So it’s likely that advice will change then, which is only one season away,” Dr Cameron said.

Ferric phosphate could be lifeline in slug battle