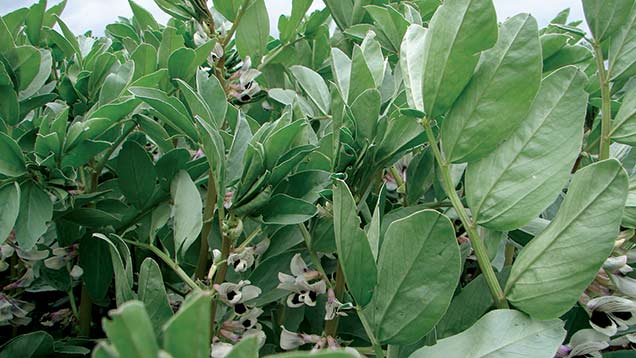 Looking at John Nix values and current prices, winter beans deliver a margin of £444, compared with £541 for oilseed rape and £402 for winter wheat (see table).

Tundra, a pale-skinned winter bean with a pale hilum colour, is suitable for the premium export market.

Currently in second-year recommendation at P2, and due for full recommendation this autumn, Tundra offers growers a 9% step up in yield over market stalwart Wizard – at 106 % yield over control, compared with Wizard’s 97%.

Pulse breeder Milika Buurman says it offers a similar level of ratings for earliness of ripening (8), shortness of straw (8) and standing power (7).

It is a moderately short straw variety, with good standing ability and is relatively early to mature.

Being a legume, winter beans also fix nitrogen and Mr Mathieson sees the benefit in his following wheat crop. “When comparing margins, this [yield increase in the following crop] needs to be added in,” he says.

In addition, oilseed rape has its own challenges, with slugs, pigeons, and flea beetle attack because of the neonicotinoid seed treatment ban.

Ms Buurman sees beans as a heavy-land break crop and their later harvest helps spread the workload. In addition, they can stand for a few days without shedding seed if harvest is delayed, unlike peas.

However, beans are sometimes perceived as an inconsistent yielding crop and Mr Mathieson believes a lot of the variation between years comes down to establishment.

“Many growers drill wheat until conditions become too poor, at which stage they switch to beans. But conditions are not ideal for beans either.”

He doesn’t grow a second cereal, so is drilling beans in that earlier slot – a fortnight earlier than the traditional bean drilling period.

One risk of drilling early is that crops get forward, but Mr Mathieson has overcome this by building his own drill and planting seed much deeper than recommended (at 15-20cm) in rows 40cm apart.

This delays emergence and he believes it also aids rooting. “I also don’t want them emerging too early as there is a nearby rookery and rooks like to pull the beans out by the shoots.

“We used to plough them in before but this was a bit hit and miss,” he adds.

Mr Mathieson studied engineering at college and enjoys designing and building his own kit. Effectively, the drill is a modified seven-leg Blench sub-soiler.

It cultivates a strip, drops the seed behind the leg, then a paddle closes the gap. This is followed by a tyre press to firm up the row.

There are two key markets: the established export market for human consumption in North Africa and a growing market for fish food in salmon farming. In addition, non-gluten food is a potential market

Ms Buurman highlights the ongoing Beans 4 Feeds project, which is looking at using beans to replace some of the imported soya and fishmeal in salmon feed.

The beans are processed to produce a high-protein concentrate for fish feed, with the left-over high-starch material used for pig feed.

Trials have demonstrated the potential in fish rations. But the bean acreage in Scotland has been declining and she believes there is scope for farmers in England to supply this growing sector. Last year saw a 10% increase in aquaculture

There is also growing interest in pulses as a gluten-free food for coeliacs. This market is worth £210m an year, with 1% of the population diagnosed with the condition. In addition, 13% of the population wants to eat gluten free.

It leaves pronounced ridges, which, he believes, will help plant survival in a hard winter.

Crops are drilled at 30deg to the last crop, but he uses the tramlines from the previous crop for spraying to minimise compaction.

In spring, the crop is rolled to level out the ridges, as this can cause problems at harvest if pods are low down. But he warns that he would not drill 20cm deep on heavier land or when drilling later: his land is sandy, clay loam.

Weed control options are limited post emergence, but Mr Mathieson is fortunate in not having a bad blackgrass problem on his farm.

His current crop was drilled on 10-11 October at a rate of 150-155kg/ha with a target population of 20/sq m. He drills at the top end of the recommended rate in order to create a thick stand to help smother weeds.

Reglone (diquat) is applied two weeks before harvest if needed to knock out weeds, such as black bindweed, that creep into thinner patches where light can penetrate the canopy.

Again, pest control treatment is carried out when pests – such as pea and bean weevil and black bean aphid – are seen.

Mr Mathieson is growing for seed, as bruchid beetle was proving difficult to treat and he could not risk losing the premium for human consumption.

The first is applied before flowering, if he sees any signs of disease, typically Octolan/Bravo (cyproconazole + chlorothalonil). The next spray is applied during early flowering with Octolan then again at late flowering adding azoxystrobin or tebuconazole if yield potential is good or rust pressure is mounting.

His three-year average is 5t/ha, although he saw a jump in yields last year, the first year he grew Tundra. This year’s crop also looks good and he believes it will also yield well above 5t/ha.