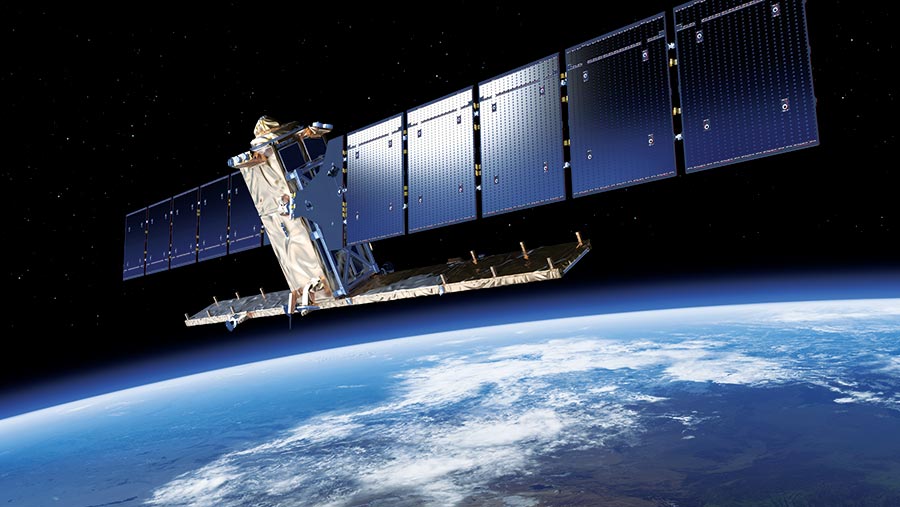 We look at the beginnings of the precision farming and data revolution, the current trends and innovations and how an arable farmer and a livestock farmer are applying technology to their systems.

When a Soyuz rocket blasted off from French Guiana almost two years ago, few people knew that the Copernicus Sentinel-1 radar satellite it was carrying would help create the first ever digital map of the UK’s arable crops, drawn from space.

The Land Cover project is one of the first operational products to be obtained from the European Copernicus Sentinel mission – a long-term programme providing a series of satellites for reliable, repeated monitoring of the Earth’s surface.

It is an innovative collaboration between environmental researchers at the Centre for Ecology & Hydrology (CEH) who joined forces with Remote Sensing Applications Consultants to map arable crops and grassland at the field level using radar satellite data.

Unveiled just weeks ago, the time-series map comprises 350 individual images covering the whole crop-growing season. Over the next three years, it will be updated annually, building up a comprehensive picture of rotational cropping across the whole of the UK.

The map has big implications for agriculture, says CEH lead scientist Daniel Morton. “The research and business opportunities this presents are countless,” he explains, likening the flow of freely available satellite data to turning on a gushing tap.

Annual mapping and analysis of crop rotations and changing cropping patterns paves the way for better evaluation and tracking of arable pests and diseases, improving early warning systems for farmers.

At government level, too, more precise knowledge of crop areas and field locations will provide policymakers with better evidence to inform their decision-making.

With more affordable kit available – and free data from the Sentinel satellite – falling costs mean agri-technology is no longer the preserve of larger farmers and contractors, with family farms and one-man bands coming on board too.

One-third more farms – both big and small – are now using some kind of information management or precision farming tool than in 2011, according to market research company Agridata. They include 87% of 200ha+ farms and 56% of 20ha+ farms.

This technology is linked to cloud-based data services and systems. So it isn’t just traditional computer devices that are connected on farm. A wide range of machines, computers and sensors are all collecting, storing and analysing farm data.

Tastes among farmers are becoming more sophisticated too, says Richard Reed, who set up LH Agro almost three decades since in 1987. The company is UK distributor for TopCon Precision Agriculture and its X30 console – used as the basis of many precision-farming systems.

“Ten years it was all about satellite guidance,” says Mr Reed. “Then it was autosteer. The trend now is ‘what else will it do?’ People want variable rate control and more advanced applications – such as real-time scanning and applications in one single pass.”

The potential is huge – and the government is already in on the act. Since the UK Agri-Tech Strategy was launched in 2013, it has committed £160m to the sector. By this summer, the biggest ever government data giveaway will have seen 8,000 Defra datasets opened up for free use.

Defra figures suggest using GPS on farm vehicles can save as much as 6-10% in inputs, fuel and time when applying sprays and fertiliser to a field. The percentage of farms using the technology rose from 14% in 2009 to 22% in 2012, says the department.

Some of the latest innovations already helping to transform farming went on show at a Royal Academy of Engineering exhibition last autumn. They included robotic weeding machines, which are helping farmers significantly improve crop yields and reduce their use of herbicides.

Innovations in the spotlight include Robocrop, a precision weed control technology developed by Garford Farm Machinery. It uses video imaging systems to differentiate between crops and weeds in real time, enabling any control measures to be targeted at specific problem areas.

This can include targeted spraying, which can reduce herbicide use by up to 99%, or mechanical weeding to avoid the need for herbicides altogether. Such techniques can drastically reduce costs while significantly lifting yields.

“There are fewer and fewer selective herbicides available – and now we have some cases where there are no herbicide options available and other techniques have to be employed,” says Garford managing director Philip Garford.

When this happens, Robocrop technology can provide additional costs savings to farmers. “We’ve now developed our InRow Weeder on to an electrically driven system, rather than hydraulics. It’s so much more efficient, using a fraction of the energy, and much more accurate.”

Such technology isn’t limited to the arable sector either. Toby Mottram is founder and chief engineer of eCow, a company which uses radio technology to monitor a cow’s internal pH and temperature.

The technology – a small wireless device which is swallowed by the cow and remains inside the digestive system – allows farmers to track the health of the animal and gives early warning of disorders and poisoning, explains Prof Mottram.

“By giving access to information that farmers cannot usually see, eCow lets farmers improve the diet and supplements they give to cows, improving the health of the herd and quickly paying for itself by maximising the production of milk.”

With a strong academic base and a growing number of agri-tech companies, experts say the UK is well placed to deliver further innovations.

It is still as difficult as ever to predict exactly what the future might hold but a second Copernicus Sentinel satellite is due to launch later this year.

Limited expansion opportunities prompted Ben Brown to embrace precision farming techniques so he could maximise output and fully utilise all available land at his disposal.

The enterprise extends to 600ha with up to 15 different crops – including a seed production operation specialising in cereals, grass and vegetables.

“There are no real opportunities to expand locally as we are surrounded by family farms,” says Mr Brown. “So we are always looking to optimise the ground we have. We often look at going back to a conventional cereal rotation of wheat, barley and oilseed rape, but it’s just not economical.”

A decision to switch the tractor fleet to Deutz-Fahr saw the business adopt the Agrosky precision farming system too.

Satellite receivers which automatically steer the tractor to 2.5cm accuracy allow the driver to focus on fine-tuning and adjusting implements for optimum performance.

Fuel costs have been reduced and time has been saved because fieldwork no longer overlaps.

Headland management has also improved. The Agrosky system was a major plus point because the entire tractor fleet can run off the same system, says Mr Brown.

A single-screen computer provides an easy, user-friendly multimedia interface capable of configuring and managing numerous on-board functions. “Being Isobus-compatible means we can run our 24m Knight Trail Blazer 4,200-litre sprayer through it as well as our Horsch drill. “

Free your time to focus on what really matters. Farmplan software is designed to help you efficiently manage your business, whatever the type and size of your farm.

See how easy computerised record keeping can be.

Robotic milkers are not the panacea they are often suggested to be, says Mr Leggott, but they do have their advantages. “You still have to manage the cows but you’re not tied to milking three times a day.

“Robots don’t give you your life back but they do enable us to get up, get on and finish by 5pm on a winter’s night. It means we have more family time.”

Installing a robotic milking system means the farm no longer has any need for a big shed for the parlour and no need for a collecting yard either. Cows are less stressed because no longer spend less time standing around waiting to be milked.

Labour use has reduced but someone still has to be on call, says Mr Leggott. The maintenance cost has to be factored in too.

A year ago, annual service and breakdown cover was £30,000. Today, Mr Leggott has slashed that cost by doing much of the maintenance himself.