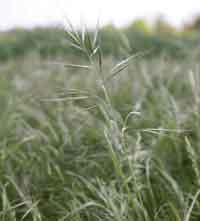 The essential role of cultivations in keeping grass weeds at bay is showing clearly in the latest results from the STAR project. Louise Impey finds out more

Crisis point is how NIAB TAG’s Jim Orson described the situation on some farms where levels of grass weeds are concerned, at a recent event in East Anglia.

Poor activity from many herbicides this year, together with the steady march of resistance, are both to blame, he highlighted, before adding that another bad year will make things very difficult for those growers.

“Where there are high populations, especially of blackgrass, it won’t be possible to rely on a tin of herbicide any more. Alternatives have to be considered.”

Speaking at an open day at the STAR project, a long-term rotational study looking at different establishment techniques within four types of rotations, Mr Orson mentioned the similarities between the project’s latest results and those from another long-term trial in France.

“Both trials confirm that the long-term future of profitable wheat production depends on rotation and cultivation method. Grass weeds in continuous wheat rotations, where shallow non-inversion tillage techniques are being used, are reaching unacceptable levels and are affecting margins.”

This is because growers are having to spend an additional £100/ha on herbicides, compared with a regime based on the plough, he said. “Ploughing gives us the opportunity not to use herbicides. It’s certainly been more cost-effective in terms of herbicide expenditure.”

“We got better control of brome in the ploughed plots, using less herbicide,” he pointed out. “We also saved having to use Broadway Star, which has the same mode of action as Atlantis (mesosulfuron + iodosulfuron), safeguarding it for another year.”

Brome has been the biggest problem weed, despite expectations that it would be blackgrass, reported his colleague Ron Stobart, who manages the trial on behalf of the funder, the Felix Thornley Cobbold Trust.

“Levels of all grass weeds were very low when we started this project back in 2006,” he reported. “We’re now getting serious problems in the continuous wheat non-inversion plots and had to spend an extra £70/ha on control. It shows how quickly things can happen.”

Meadow brome is more problematic than sterile brome, he added. “It’s important to know which species you’re dealing with, as they are controlled in different ways.”

Leave meadow brome seeds on the soil surface, where they will break dormancy and can then be controlled in one hit, advised Mr Orson. “It’s easier to control than sterile brome, which has to be covered by cultivations after harvest, to get it away from the light. Even in a dry autumn, it’s better to cover it up.”

Having highlighted the better results achieved by ploughing, Mr Stobart accepted that speed of working hadn’t been included in the project’s financial results. “The highest yields have also come from the ploughed treatments, but the best margins have been recorded in the managed approach.”

Choice of spring break crop in the spring cropping rotation was also discussed at the open day, given the site’s clay soil.

Spring beans, which are featuring this year, grow well on medium to heavy soils, said Anthony Biddle of PGRO, although they don’t enjoy drought conditions.

“They need to establish a good rooting structure, as they are dependent on nitrogen fixation. So it’s important not to restrict the roots in any way.”

That’s why shallow cultivations can give problems, he added. “No pulse crop likes waterlogging, so the rain has to be able to penetrate the soil in a wet year. And that’s better in a ploughed situation, where the roots can also get down well.”

Relevant to this year is the fact that most of the yield from spring beans comes from the bottom three or four podding nodes, noted Dr Biddle.

“That’s why you have to collect all of them with the combine at harvest. And for that to happen, you need crop height.”

Unfortunately, the prolonged dry conditions mean that many bean crops are very short this year, he warned. “Pay close attention to detail at harvest, otherwise yields could suffer.”

Spring oats are also included in the spring cropping rotation, ended Mr Stobart. “It’s not the largest market, but they do grow well on heavy land. The other option was linseed, but we considered that the oats would be more competitive.”