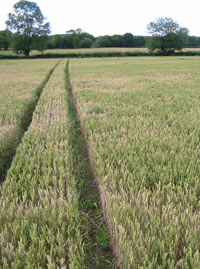 Take-all can cause big winter barley losses, even on relatively heavy land not considered risky for the disease, warns Masstock.

To address a decade of relative barley performance stagnation, the firm has been investigating a range of agronomic options.

“Although last year’s trials focused mainly on varieties, seed rates and PGRs, we took the opportunity to assess take-all treatment in a single variety despite the generally low-risk nature of the site – and we’re very glad we did,” says Mr Lloyd.

At best, it did so by an average of 1.16t/ha across all seed rate and PGR treatments to head the eight-variety performance list at 9.85 t/ha. It boosted average specific weight by 1.1kg/hl and reduced lodging by 20%.

“There is a clear need to focus on yield in all future barley production in the continued absence of reliable premiums.”

Raw data from this year’s trials suggest an average 0.4t/ha yield boost from Latitude treatment in two-row Suzuka, although the results remain to be analysed statistically.

“Regardless of soil type, take-all seed treatment is something many more winter barley growers really should consider as part of their crop improvement strategies,” advises Mr Lloyd.

“Given its shorter growing season and earlier determination of yield components, all our studies emphasise the importance of getting winter barley going earlier and better.

“Sowing rates nearer 350-400 seeds/sq m rather than the current 250-300 seeds/sq m norm, an effective T0 fungicide and early spring nitrogen offer major opportunities for performance improvement. As with wheat and oilseed rape, anything that can be done to improve rooting will pay dividends.

“Take-all seed treatment looks like playing a valuable role here; certainly where seed rates are being increased. Thicker sowing means more roots per hectare but fewer per plant, both of which make take-all a particular threat if disease carry-over is high.”