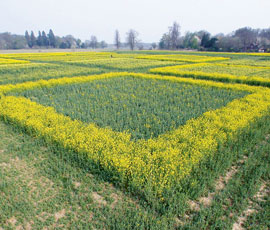 That helps protect the oilseed rape crop as it passes the damage-susceptible yellow bud stage.

While growing two different crops alongside each other may be impractical for many growers, trials are ongoing looking at whether fast-developing, early flowering winter oilseed rape varieties could be used as border trap crops in a two-cultivar oilseed rape strategy.

Dr Cook conducted a series of experiments looking at colour and smell to try to understand the mechanisms of attraction from pollen beetle towards turnip rape and oilseed rape.

The trials found beetles were attracted to flowering plants, regardless of species. “When both plants were in flower there was no preference at all.”

Pollen beetles have an amazing attraction for the colour yellow, she says, which partly explains the attraction to flowering plants.

“Phenylacetaldehyde and indole are very attractive to pollen beetle,” she says.

That explained why pollen beetles showed a clear preference for turnip rape when both plants were in bud.

“That means it will attract and retain beetles,” says Dr Cook. “The beetles will remain there and any new infestations will prefer turnip rape as it flowers earlier than oilseed rape.”

The trials have been scaled up to 1ha field plot trials as part of the Pollen Beetle LINK Project, a three-year study ending this May.

Results show that at the damage susceptible stage of oilseed rape – green to yellow bud stage – the plots surrounded with a turnip rape border had fewer beetles.

Plant breeding partners involved in the project have been looking at their lines and data sets to look for a highly attractive oilseed rape crop to use as a trap crop.

“Four very early flowering lines have been selected and are now being trialled,” says Dr Cook.

“Hopefully, we will be able to plant them on the same date, as you do with turnip rape, which just grows faster.

“Turnip rape can be harvested as an oilseed rape seed, but as it grows faster, there are problems with seed shed.

“So we are also looking for an early flowering turnip rape line that matures late as a trap crop.”