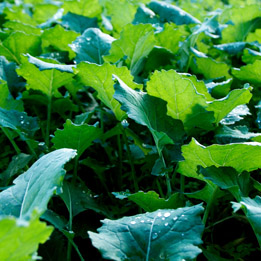 A survey of 80 farms from the English south coast to north Scotland was conducted in March and April, and 50 samples from each field surveyed have been virus tested.

The results show hot spots along the south coast and around the Wash, where fields are up to 70% infected.

In the context of last autumn and winter the finding has surprised Mark Stevens. “Infection of oilseed rape with TuYV usually begins in early September when aphids carrying it migrate into crops. In marked contrast to the previous two “hot” seasons for aphid activity, last autumn was very quiet, followed by a colder than usual winter. So we suspected we would hardly find any virus this spring.”

So TuYV must now be considered a serious risk to crops every year, he concludes, not just in years of aphid-friendly autumns and winters. It can cut yields by up to 26%, reduce oil content and increase glucosinolates.

Last winter knocked predators back, adds Dr Stevens. “So the question this year is as aphid numbers recover and build up during the summer, will the predators catch them up?

“I expect it means that this autumn’s migration into crops could be bigger than usual, particularly if the weather is favourable.”

BB trials Modesto gave a 0.4 t/ha yield lift in 2007 and 0.7 t/ha in 2008, and was more persistent than previous standard Chinook (beta-cyfluthrin + imidacloprid).

Trials started last autumn show Cruiser OSR is also active on aphids, and its ability to reduce TuYV spread will be better understood after they are harvested this summer, says Dr Stevens.

“The big question for seed treatments is when do they run out of steam? Is it six weeks after drilling or 10 weeks? That could make a big difference to their role in limiting the impact of TuYV.”