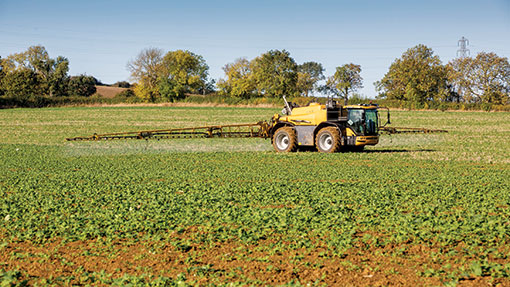 A virus that can cut OSR yields up to 30% will be a greater threat from next autumn. But the first resistant variety may offer a solution, as Richard Allison found out.

A variety of oilseed rape resistant to turnip yellows virus offers a way to overcome the increased virus threat expected after the loss of neonicotinoid seed treatments.

Flea beetles feed on oilseed rape cotyledons and early true leaves – characterised by “shot-holing” and can decimate establishing crops. However, once the crop is established, TuYV is the biggest threat, said Mr Marr.

The virus is spread by aphids, the key one being the peach potato aphid (Myzus persicae). “Up to 72% of M persicae are carrying the virus,” said Mr Marr at a briefing.

A three-year project carried out at the University of Warwick showed just how widespread the virus is.

“In 2007, up to 89% OSR crops tested were infected, but the following year it was 24% which was a lower aphid year. Then in 2009, infection was 100% being a high- pressure year ,” said John Walsh, research leader at the University of Warwick.

Furthermore, it is also very widespread in brassica vegetable crops which act as a green bridge, with the virus able to cross over to oilseed rape with constant circulating between crops.

The virus is estimated to cost the industry £100m with 26% loss in yield, although some trials show losses can be as high as 40%. Mr Marr believes it is one reason varieties don’t reach their full potential.

There are two key times in the year when aphids move into oilseed rape in the spring and in autumn. “They don’t fly, but instead drift when conditions are right, such as wind speed.”

Dr Walsh warns that timing of infection is important, as yield losses tend to be greater when infected earlier in the season. “We are likely to see increased prevalence of the virus and greater yield losses.”

Foliar insecticides will be the obvious choice next season, but there is widespread resistance to pyrethroids and pirimicarb (MACE resistance). “Therefore, Plenum (pymetrozine) is the main recognised insecticide,” he said.

Because of the difficulty of achieving good control, both Mr Marr and Dr Walsh see plant resistance as the best way forward.

For the past 15 years, Limagrain has being working on producing a resistant variety using information generated in pre-breeding work.

The resistance was first identified in a stubble turnip and was introduced into rape using conventional crossing, aided by marker technology.

The result is Amalie, the first commercial variety with single gene resistance. It still gets infected, but with much lower levels of virus.

It has completed National Listing (NL) and will be considered for Recommended List trials in 2014-15, the first year without seed treatments.

Limagrain OSR product manager Les Daubney said that in its own right, it gives a good performance with 99% treated yield and 100% gross output in NL trials.

“Even in trials with neonicotinoid seed treatments, it puts in a competent performance and is a sound variety,” said Mr Daubney.

In LG untreated trials, it gave an average untreated yield of 110%, with some sites at 115% and others at 99%. He puts this variability is down to differences in virus, showing higher relative yields in high-infection years.

Agronomy wise, it is on a par with favourite DK Cabernet being stiff, short (140cm) and is a little earlier maturing with good disease resistance to other diseases including light leaf spot and stem canker.

“We saw rapid growth in September and this biomass has diluted the insecticide, thus reducing the efficacy of seed treatments,” said Philip Marr of Agrii.

Peach potato aphids are attracted by the UV reflected from high-biomass crops, so these lush crops could attract more this season. This coupled with mild winter could see many more aphids move in, he said.

HGCA data shows that January to April is when the greatest infection occurs, but the first insecticide typically does not go on until April for pollen beetle control, so will miss the threat.

So this spring Mr Marr will be recommending his agronomists to consider adding an aphidcide when first going into rape this spring with a fungicide or nutrient application.