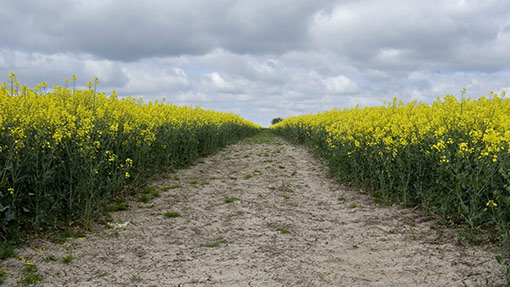 Two soil-borne pathogens may be severely restricting oilseed rape yields, with one researcher saying that extending the length of rotations is seen as the best way of combating these threats.

The two pathogens were first discovered in oilseed rape crops in 2007 and could potentially cut yields by more than 40%.

Alex McCormack, research student at Harper Adams University, has been monitoring the presence of the two novel pathogens, Olpidium brassicae and Pyrenochaeta.

The first can cut yields by 29% in glasshouse experiments and can be spread on trash and tends to build up in short oilseed rape rotations.

The second can cut yields by 42%, again in glasshouse trials, and while it is not affected by rotation it tends to favour alkali soils.

Mr McCormack says this pathogen tends to be seen in sugar beet areas of East Anglia, where heavy liming takes place and soils have a high pH.

As many other arable soils tend to have a lower pH, the pathogen has been seen only at lower levels, but it is potentially a concern as it can delay flowering in oilseed rape crops.

“At the moment the best advice for growers to counter these pathogens is to extend the rotation,” he says.

These pathogens could be one of the reasons there is a 20-25% yield reduction when growing continuous oilseed rape compared with growing the crop on virgin rapeseed land.

There is even a 10% yield reduction when oilseed rape is grown in a one-in-three rotation compared to virgin rapeseed land.

Twenty years of trials have shown an increasing gap between HGCA trial yield results, which tend to be situated on land in long rotations, and farms with shorter oilseed rape rotations.

“Growing oilseed rape in intensive rotations can lead to an increase in soil-borne pathogens, which are difficult to control,” he says.

Mr McCormack was attending an AgriiFocus workshop in Wiltshire organised by the advisory and distribution group Agrii.