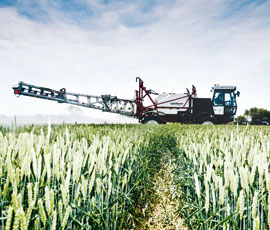 New EU rules on the sustainable use of pesticides, which come into force later this month (18 July), will have the greatest effect on occasional users.

Last week, the Chemicals Regulatory Directive outlined how it was implementing the European Sustainable Use Directive (SUD) for crop protection products under the Plant Protection Products Regulations 2012.

However, both the Voluntary Initiative and NFU believe the legislation will only have a small effect on regular spray operators who already adhere to best practice guidelines.

“The past decade has seen a massive take up of VI schemes such as the National Register of Sprayer Operators and the National Sprayer Testing Scheme, which means UK farmers are well placed to meet the SUD requirements,” says VI chairman Richard Butler.

“Most responsible farms have already put in place arrangements to train operators, test sprayers and protect water quality – all key aspects of the SUD.”

However, the NFU is concerned over the effect it will have on occasional sprayers and the use of “continuous professional development” as a basis for certification of those operating under “grandfather rights”.

NFU deputy president Meurig Raymond says: “It does appear that the legislation will have the greatest effect on occasional users, who may be required to undertake a range of measures such as sprayer testing. While this is an improvement on best practice, it is important that DEFRA is very clear on what will be required and the associated timeframe, as there are various staggered deadlines.

“The indication is that DEFRA is considering options for continuous professional development as a basis for certification of spray operators previously operating under grandfather rights. However, we are concerned that it is still unclear on how this process might operate.

“This is a major concern for many growers and spray operators who will not be sure if their continuous professional development under schemes like the NRoSO will be sufficient to forego further testing.”