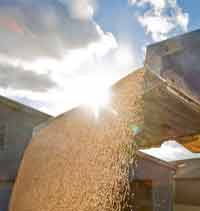 With the European harvest mostly completed markets are now waiting for the completion of the maize harvest, which will complete the feed grain supply picture for the season ahead.

There haven’t been any unexpected yield shocks, maintaining Strategie Grains prediction of 129m tonnes for the EU-27 wheat crop.

Harvest is continuing in Russia, moving into Siberia. By 1 September, 65.2m tonnes of grain had been harvested which, although 20m tonnes behind last year, is still significant. Dry weather has destroyed some spring crops in central regions. However, significant carry-over stocks remain, which will buffer the reduced 2009 crops.

The Ukrainian wheat crop is expected to be almost 20m tonnes, 5m tonnes below 2008. Despite a smaller crop, conditions were more favourable with less pest damage. This should mean much less feed wheat, but there are significant carry-over stocks. Ports are reportedly full of grain awaiting export, putting strain on logistics.

Despite dry weather, the French wheat crop has yielded 7.6t/ha, 0.3t/ha over 2008 (Strategie Grains). At 37m tonnes France is the EU’s biggest producer and exporter. In the south, hot, dry weather helped harvest, but may have stressed the developing maize crop. The barley crop also had better yields with high selection rates on malting samples.

The German 2009 cereal harvest is the third largest on record producing 49.3m tonnes according to the Ag. Ministry. The first official winter wheat crop estimate is 24.8m tonnes, 3.5% below 2008 but 10% over the five-year average. Yields have been relatively good at 7.8t/ha, almost 5% above average. The ministry says quality is “satisfactory to good” but, variability is reported, especially in protein because of the higher than expected yield. The barley crop, despite being planted on less land totals 12.3m tonnes, 3% higher than 2008. Quality is also good. Germany also had a record oilseed rape crop in 2009 at 6.21m tonnes.

Following two plentiful harvests, dry spring conditions have reduced the Spanish cereal crop by 25% to 17.9m tonnes. Questions surround maize which is still to be harvested. The ministry put the crop 6% down on 2008 at 3.4m tonnes.

What it means for the UK

The UK wheat market follows closely the French, which will need to maintain non-EU exports and remain competitive with US and Black Sea cargoes. UK wheat quality looks okay so there shouldn’t be the significant discounts of UK wheat to French that we have seen in the past two seasons. Although Spanish crops are reduced there is significant carry-over and competition from the Black Sea, so UK exports will need to remain competitively priced. The UK is likely to have significant surplus of barley in 2009/10, but our main competitors also have surpluses so can UK barley exports be competitive enough?