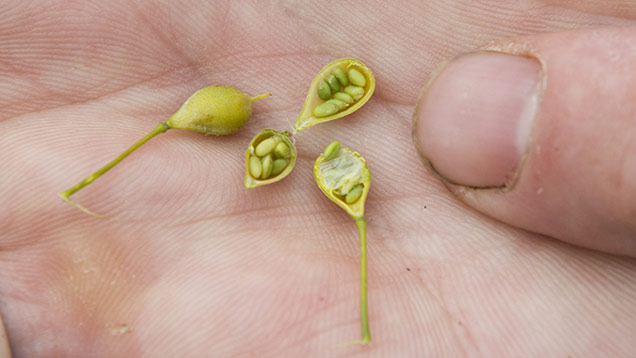 The landmark proof of concept showed that a crop plant could be engineered to produce high levels of health-boosting omega-3s.

Scientists at Rothamsted hailed it as a “major breakthrough” in genetics, which raises hopes for sustainable land-based sources of omega-3 fatty acids.

“Our results give hope that oilseed crops grown on land can contribute to improving the sustainability of the fish farming industry and the marine environment in the future,” said Dr Olga Sayanova, the senior Rothamsted researcher who developed the plants.

For the experiment, genes were taken from algae and inserted into camelina sativa plants, which are grown for their seed oil.

Project leader Johnathan Napier and his team of researchers harvested the crop by hand at Rothamsted’s Hertfordshire site in September.

A small amount of the harvested seed analysed for its oil content provided “clear evidence” that the crop produced “useful quantities” of fish oils without any negative effects on yields.

Omega-3s are polyunsaturated fats found naturally in oily fish, nuts, seeds and leafy green vegetables. They are associated with many health benefits including prevention of heart disease and stroke.

But wild stocks of oily fish, such as mackerel and salmon, are under pressure.

Prof Napier said the camelina plant oil could be fed to salmon and other farmed fish, as an alternative feed source to fishmeal and fish oil from small wild fish, such as anchovies, to boost their omega-3 levels.

“People find it a bit surprising that fish oils are not made by fish. They obtain these omega-3 fatty acids from the marine algae they feed on,” noted Prof Napier.

“If the fish diet doesn’t include enough omega-3 oils it will not come out the other end. We would use this crop to feed salmon and other marine species that have a real requirement.”

If the crop were to be grown commercially, Prof Napier said it would likely be outside the EU, due to the current impasse on GM crops.

“It probably makes more sense to think long-term about growing these crops in North or South America, in countries which have large aquaculture industries, such as Canada or Chile.”

NFU chief science and regulatory affairs adviser Dr Helen Ferrier said: “This is a very exciting trial and we are glad to see positive results as a step towards sustainable production of a particularly valuable feed crop given the nutritional importance of eating fish.

“The research shows a potentially highly productive relationship between agriculture and aquaculture in the future to ensure there is a sustainable source of fish. It also shows the potential for direct consumer, societal and environmental benefit from biotechnology.

“British farmers are natural innovators and are very interested in new crops. They should be able to take the opportunity of new markets and innovations, to be part of a competitive and vibrant sector of the UK economy.

The field trial and associated laboratory analyses are being funded by the government-supported Biotechnology and Biological Sciences Research Council. The trial is due to run every spring/summer at Rothamsted until 2017.

The research was reported in the journal Metabolic Engineering Communications.