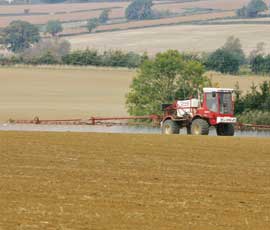 The UK should not ignore the threat counterfeit pesticides pose to agriculture amid concerns that the problem is being underplayed in this country, say criminologists.

Counterfeit pesticides are a global problem, being particularly common in Asia and parts of eastern Europe, where as much as 25% of pesticides could be fake.

Earlier this month, Farmers Weekly exclusively revealed that a British farmer who ordered the herbicide Falcon (propaquizafop) was sold a fake parallel product from his buying group after being told his original was out of stock.

Chris Sambrook, an experienced criminologist, is part of a research team at Harper Adams University which is looking into the threat counterfeit crop protection products pose to agriculture.

He said: “Worldwide fake crop protection products are a major counterfeiting problem. This illegal industry is believed to be worth around $5.8bn (£3.63bn) a year.

“In some markets within the EU, it is thought that as much as 25% of the pesticides sold originate from the black market and are either substandard or counterfeit versions.”

He added: “It’s not likely that this problem exists to the same extent in the UK, but this doesn’t mean it is a problem which we can safely ignore.

“This recent case illustrates that UK agriculture may be the target of organised crime gangs who are largely responsible for importing and distributing counterfeit products, including fake pesticides.”

Research conducted by the team at Harper Adams, which includes Dr Richard Byrne, a specialist in Rural Security, and agronomist Dr Martin Hare, will include interviews with key industry players and others with strong professional interests in the problem, such as the police and legislators.

Researchers hope that the study will enable them to identify key risk factors and help the industry to reinforce their current counter-measures.

“Counterfeit crop protection products are unlike many other fake goods. Not only do they represent a significant loss to the national economy, as do all counterfeits, but if they find their way into the marketplace, and particularly on to farms, then they also carry significant risks both to the environment and to public health,” said Mr Sambrook.

Crop protection company Syngenta and Thames Valley Police are collaborating with Harper Adams University on this study. As part of its ongoing Rural Crime Strategy, Thames Valley Police, alongside agricultural industry officials, is developing a response to this type of crime.