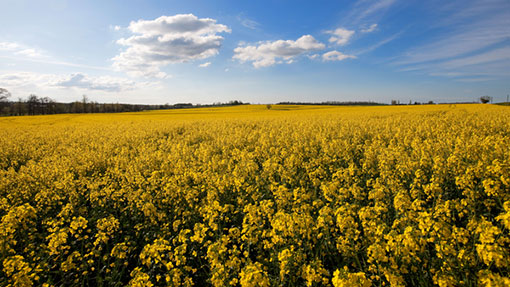 Oilseed rape crops are up to one month ahead of the same time last year, with some plants flowering “super-early”, according to ADAS.

“The map colours indicate how close we are to the expected appearance of the sclerotinia fungal fruiting bodies [an apothecium].”

“Red areas on the map indicate apothecia are already present, or expected to appear imminently. This is in stark contrast to what was seen even as late as May last year.”

South-west England generally warms up first and the North East last. Therefore, apothecia tend to be seen earliest in the South West and latest in the North,” she added.

“The colour map broadly reflects this. However, there will be variation with local topography and conditions.” 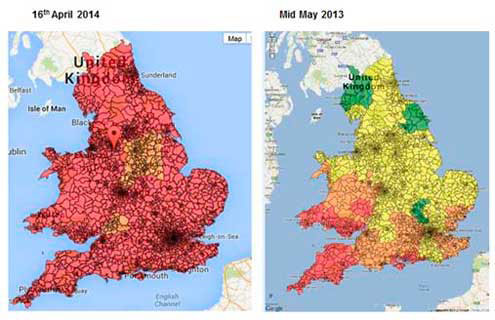 Dr Young recommends that growers in all areas need to review their crop risk and plan their fungicide strategies accordingly.

“Any crops at early or mid-flower, which are in red areas, should be considered at risk from infection and it is likely that foliar fungicide applications now may be justified,” she said.

Crops in the remaining orange areas will also be at risk shortly, so fungicide treatment now will also be beneficial, assuming a three-week protection window for fungicides, under normal conditions, she added.

If lodging occurs, however, infection occurring at any flowering phase could spread rapidly through a crop by plant-to-plant spread.

In terms of timing, she advises that the main difference for growers this year, compared with 2013, is the calendar dates for early flower fungicide applications – growers will need to be applying fungicides now, or have already applied them, rather than the more usual time of later in April or into May.

BASF’s Sarah Mountford-Smith recommends that for applications targeted at sclerotinia, growers should use Filan (boscalid) at 0.3-0.5kg/ha, applied ideally before petal fall.

She said: “Both Filan and prothioconazole-based fungicides give excellent control of sclerotinia but, importantly, HGCA trials have shown that Filan consistently contributes a yield increase in the absence of disease.”

She added: “It is also a different mode of action for resistance management of light leaf spot, at a time when triazole-resistant strains of light leaf spot exist, and since spores will still be present in the crop.

“And finally, Filan is ‘bee-safe’; it can be mixed with pyrethroids for seed weevil control at flowering, when bees are not foraging.”