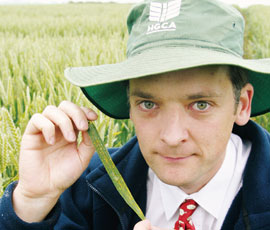 Many T1 treatments haven’t worked as well as expected in this year’s high disease pressure conditions, said Jonathan Blake of ADAS at the Boxworth open day.

“Using conventional treatments in an unconventional season hasn’t been enough,” he reported.

Perfect conditions for septoria have provided a severe test for some sprays, he said. “Where a half dose triazole plus a bit of Bravo worked well in previous seasons, it hasn’t had the same effect in 2012.”

Slow leaf emergence, together with the rainfall for multiple infection events, is to blame, he said. “We haven’t had a season like this for a while and we don’t know what all the effects will be yet.”

Bringing the SDHIs into the T1 timing could be the solution for future years, he suggested. “We’ve looked at the three SDHIs used at T1. Adexar seems to be the strongest of the three, but it comes at a price of an extra £17/ha.”