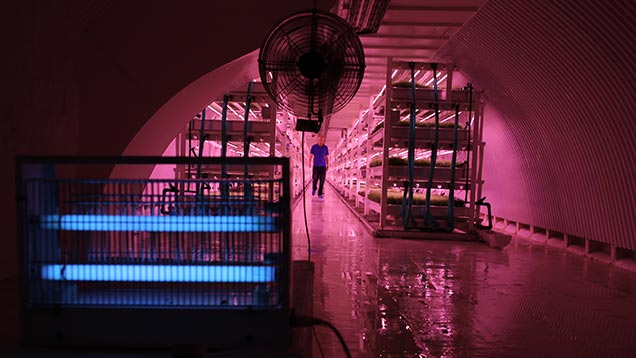 An underground urban farm based in a disused Second World War bomb shelter 100ft (30m) below the streets of south London has been unveiled.

The high-tech farm in Clapham, which has won the backing of Michelin-starred chef Michel Roux Jr, expects to begin trading in July.

Crops will be grown in a sealed clean-room environment with a bespoke ventilation system, advanced LED lighting and a sophisticated irrigation system that enable the farm to produce crops with very little energy.

The farm’s mission is to deliver fresh produce with zero effect on the environment and all energy is sourced from green suppliers.

The farm says its advanced systems mean crops can be grown year-round in a perfect, pesticide-free environment because there is no risk of pests or disease.

“Because we have total control over their environment, each tiny leaf tastes as amazing as the last and because they are unaffected by the weather and seasonal changes, we can reduce the need to import crops and drastically reduce the food miles for retailers and consumers.”

The project is called Growing Underground and has been founded by West Country entrepreneurs Richard Ballard and Steven Dring, who turned to crowd-funding to raise capital for the investment.

“We are delighted that our first shoots will be delivered to the surface in the next few weeks”, said Mr Ballard.  “After eighteen months of research, development, growing trials – and tribulations – we are about to start supplying into the market.

“Phase one represents more than £750,000 investment in sustainable urban farming for London and we are delighted to be fulfilling our first orders within weeks,” added Mr Dring.

Watch the video made when the founders were trying to raise investment through crowd-funding.

Growing Underground’s first commercial client will be County Supplies London, supplying restaurants via Covent Garden market. A consumer offering will follow in the near future.

Michel Roux Jr said: “I’m looking forward to creating my first dish using produce from the world’s first underground urban farm, less than two miles as the crow flies from the heart of London. It is great to be involved in this ambitious project, for which we have equally ambitious growth plans.  Above all, it is fantastic to be able to source produce that is so fresh in the heart of Britain’s largest city.”

The tunnels were used during the Second World War as a bomb shelter for London residents. The current site was designed to accommodate 8,000 Londoners.  A neighbouring site provides an expansion opportunity to Growing Underground, creating an invisible urban growing space of several acres.