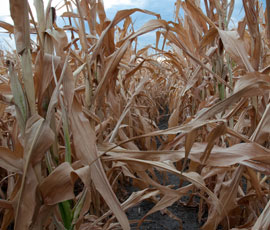 The US Department of Agriculture has slashed its estimate of maize production by a further 55m tonnes, to 329m tonnes – its lowest level since 2006/07.

Following widespread drought, the USDA cut yield estimates to 7.73t/ha, the lowest since 1995/96.

That put its production estimate 27% below its original June figure of 375m tonnes.

However, analysts had been expecting a figure below 300m tonnes, with the market pricing in forecasts as low as 279m tonnes.

“Early in the spring, in response to the strongest plantings since the 1930s, the world was anticipating a recovery into global feed grain supplies,” said Jack Watts, senior analyst at the HGCA.

“However, the grain situation is in fact likely to get worse rather than better than last year.”

Although US farmers planted 39m ha of maize, 9% had since been abandoned, and end of season maize stocks were now pegged at 16.5m tonnes, 13.5m tonnes less than forecast in July and just 6% of annual US demand.