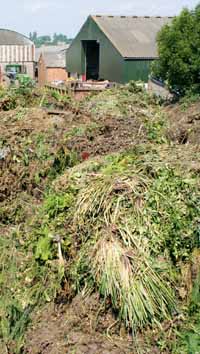 If you can get it relatively cheaply, it’s got to be worth having. That is the general consensus among growers who take regular supplies of compost as part of their nutrient input programme.

And judging by the results of a recent industry survey, a growing number of farmers are reaping the benefits of a product that is becoming available in greater quantities as efforts continue to drastically reduce the amount of material going into landfill.

According to the recycling promotion body WRAP and the Association for Organics Recycling (AfOR), some 2.85m tonnes of green waste compost were produced in 2008-09, with farmland receiving 60% of that amount. Over the past five years, the amount applied to farmland has increased threefold.

More than 70% of commercial compost is produced to the British Standard PAS 100, which requires controls on the incoming waste, the composting process and product quality. It also demands use of a quality management system.

For the first time, DEFRA’s RB209 (The Fertiliser Manual) includes information on the nutrient value of compost to help growers make allowances in their use of inorganic fertilisers. It notes that the nutrient value will vary depending on the source materials and treatment process – but also that suppliers should provide specific analyses and other relevant information.

Things are a little better when it comes to compost made from a combination of green and food waste, and which will be produced in increasing amounts over the next few years. Experiments indicate that around 5% of the total nitrogen applied (typically 11kg nitrogen/t) is available to the next crop, irrespective of when it goes on.

The Fertiliser Manual notes that compost provides a useful supply of other nutrients, with around 50% of phosphate (typically 3-3.8kg/t) available to the next crop. The remainder is released slowly over the crop rotation, helping to maintain the target soil index for this nutrient.

Potash content is also readily available, with around 80% of the typical 5.5kg in green waste compost and 8.0kg/t in green/food waste compost being in soluble form. In addition, there are useful quantities of sulphur and magnesium.

On top of any nutrient delivery, compost is attractive to many growers for the organic matter it supplies. Apart from any beneficial effect on water holding capacity, improvement in soil workability is the main attraction. WRAP reports that the Greenleaf project in East Anglia demonstrated an 8% reduction in draft force on a clay loam soil after long term use of the material as organic matter content increased.

David Clarke and his son, William, view compost from two aspects – as the product of a welcome farm diversification venture and as a valuable source of nutrients and organic matter for their arable land.

“We no longer buy in any P and K, and we’ve reduced the amount of bagged nitrogen we use,” says David.

Composting of green waste was started eight years ago under the exemption rules that applied at the time. But after significant investment, the operation at Soars Lodge Farm, six miles outside Leicester, is now fully licensed.

The condition of incoming material has improved as councils have successfully encouraged people to segregate their waste more reliably. That, together with installing an air separator to remove plastic, has improved the standard of the finished product.

“You still get a little plastic but it’s mostly biodegradable and soon disappears,” says David.

With three neighbouring farms being enthusiastic users there is no difficulty dispensing Soars Lodge compost to more than 400ha (1,000 acres) of arable land.

“We’ve seen clear benefits on our own farm, in terms of reduced fertiliser costs for the wheat and oilseed rape we grow, and improved soil structure, which becomes apparent soon after you start applying it,” says David.

“One field we have looked as if someone had stripped off all the topsoil it was so bad. It’s now in marvellous shape and all our heavier ground has become much more workable.”