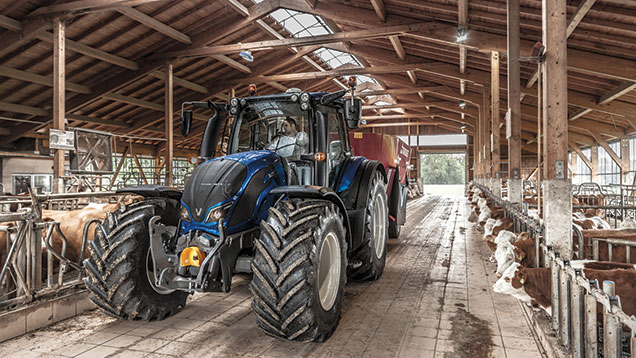 Valtra has been pushing the poky four-cylinder concept for years and its latest N-series tractor is the most powerful yet, with up to 185hp on tap.

As well as the power hike, the Finn’s high-powered four-pot – now in its fourth generation – has been given a complete overhaul.

This means it shares the same cab and most of the features fitted to its bigger T-series sibling that was launched late last year.

Is the cab any better?

Just as it was for the T-series, the reworked cab will be one of the most noticeable upgrades for current N-series owners.

This is a completely new design with curved pillars and plenty of glass. As a result, visibility is better all round, it is a good bit quieter and the control layout is a lot simpler, too.

All this makes it much easier to use as a loader tractor.

The only real difference from the six-pot version is that N-series buyers can now add a right-hand door from the options list.

What’s under the bonnet?

When Valtra launched the current N163 it was the most powerful four-pot on the market.

Since then rivals have been gradually creeping up the horsepower ladder, so the Finns have decided to reassert their authority.

That means rated max power in the top-spec N174 sits at a pretty impressive 165hp and with boost this bumps up to 185hp for pto and transport work.

However, it is very similar to Massey Ferguson’s 6616 – which uses the same 4.9-litre Agco/Sisu engine. This develops a slightly lower 160hp as standard, but also boosts to 185hp.

The three biggest tractors in the N-series range all come with this 4.9-litre block, but there is a slightly lower-displacement 4.4-litre version in the smaller models.

Both engines use AdBlue only to keep the exhaust gases clean, so there are no diesel particulate filters to deal with.

How many transmissions are on offer?

As with the current N-series tractors, Valtra has decided to stick with its four different spec levels and two transmissions.

That means HiTech, Active and Versu tractors will come with a 30-speed semi-powershift gearbox and Direct models will have a four-range CVT on board.

HiTech models are the most basic of the bunch and have historically been Valtra’s best-selling N-series machines.

The main differences between these and the higher-spec tractors are that they run a simpler open-centre hydraulic system and have a single reservoir for transmission and back-end oil.

HiTech tractors also have a simpler console-mounted stick for controlling the transmission, however, an armrest can be picked from the options list.

Upgrading to an Active model gives you load-sensing hydraulics as standard, split oil reservoirs and an armrest with thumb stick for controlling gear changes.

The Versu is the top-spec powershift tractor, which gets extras like a small screen at the end of the armrest for adjusting settings and electric spool valves.

Direct tractors are largely the same spec as the Versu, but they come with Valtra’s four-range CVT transmission. This is controlled using the same thumb-like stick as the Versu.

What else has changed?

Other upgrades include a faster hydraulic pump, three pto speeds, a hill-hold function and a system for automatically reducing wheel slip.

N-series tractors will start appearing in dealer’s yards in the next couple of months.