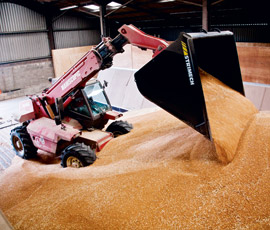 Harvest is proving to be a very mixed bag across the West Country, with both yields and progress varying widely.

“Some people are really quite pleased with their crops, while others are pretty disappointed and despondent.”

Farmers with light drills who managed to get onto the land early last autumn had generally fared the best, but even neighbouring farmers with similar kit had extremely different results, he added. “There’s just no general trend.”

In Somerset and the Bristol area, harvest was about 60% complete on average, with Devon half done, and Cornwall also about 60% through, said Mr Eastwood.

“Yields are better than anticipated, although people who thought they were doing really well earlier on have reined back a bit – overall yields will be below the five-year average.”

Quality, however, was superb, which would take a lot of pressure off in terms of marketing the grain, he added.

“We’re still getting a mix of every crop coming in, and although most farmers are in no mad hurry, the days are getting shorter, with dewfall limiting combining in the evenings and early mornings.”

Spring barley and spring oats had performed quite well, but oilseed rape yields and quality were poor, with very high admixture contents.

“We had some rapeseed come into store that we weren’t sure whether we should tip as rape or barley – I think we’ll do both, after cleaning it up.”