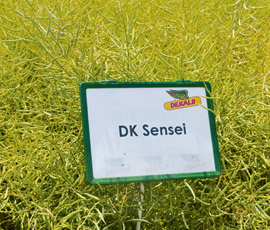 Choosing a winter oilseed rape variety to fit in with a likely drilling date is vital, argues one crop expert. David Jones reports ahead of a likely busy autumn sowing season

Variety choice is the key to establishing oilseed rape from mid-August to late September and is seen as even more important than drilling date.

Assessing varieties for vigorous growth in the autumn and spring is vital and could allow successful sowing as late as the third week of September.

Oilseed rape expert Philip Marr has trialled varieties for more than 20 years and says only the most vigorous should be drilled late.

“You could drill a fast-developing variety up to 18 September, but don’t drill a slow developer in September,” says Mr Marr, a crop specialist with advisory group Agrii.

He has picked out Expower, Excellium and Harper as particularly vigorous growing varieties in the autumn and also the early spring.

Mr Marr stresses that growers should match varieties to expected drilling dates, but does not recommend deliberately delaying drilling to suite the variety.

If a vigorous growing variety is drilling early, then the crop’s early growth could be controlled by growth regulators to prevent problems with lodging leading up to harvest.

He advises growers to chose two or more varieties for drilling to fit in with likely sowing dates.

“Variety choice is key for drilling between mid-August and late September, but don’t delayed drilling because the weather can change,” he says.

One Yorkshire grower is planning to drill 2,000ha of oilseed rape this autumn and Mr Marr is advising the use of five different varieties.

For smaller-scale growers, varietal choice is still key to fit in with rotations and harvest times of preceding crops, Mr Marr advises.

“For those growing oilseed rape after second wheats, they would need a fast developer, while for those drilling early after winter barley can get away with a slow developer,” he says.

“Growers should not look at the calendar date, they should look at field conditions, moisture and temperature and then chose a variety,” says Geoff Hall, commercial lead seeds & traits for NorthWest Europe at Monsanto.

The group has a near-50% share of the oilseed rape seed market and is breeder of all the varieties beginning with an Ex.

“Pigeon do not like to land in a vigorous growing crop of rapeseed,” he says.

An August-emerged crop reaches floret initiation around the third week in December and after that stage the main tap root does not get any larger, he says.

An October-emerged crop will reach floret initiation in the third week of February, leading to problems for the winter survival of the crop.

Another factor for good establishment is cuticle wax on the plant, and Mr Marr identifies Harper as the most heavily waxed, followed by Expower and Excellium – which is important for winter hardiness.

He adds that varietal choice is a better way to deal with a range of drilling dates than varying the seed rate.

The oilseed rape breeders’ biggest challenge to pushing up yields is to improve early growth and establishment.

Many have been working towards better yield stability ever since the crop first appeared in Britain in the 1970s and this early growth is seen as key.

“The main trait we are looking for is vigorous growth, as this is the biggest component of yield stability,” says Monsanto’s UK oilseed rape breeder Matthew Clarke.

This is why he is working to assess varieties for early growth and allow growers a choice of vigour, which can be suitable for a range of drilling dates.

He is also looking at a number of other different traits with a level of pod shatter resistance brought in with Excalibur and all succeeding Monsanto varieties.

Mr Clarke is also looking at the semi-dwarf trait with delayed stem elongation that has given very good winter hardiness.

The group is also developing its Vistive brand of rapeseed with high oleic, low linolenic (HO,LL) oils, which currently account for around 2-3% of the national crop area.

They have been dubbed the triple lows after breeders reduced the erucic acid of rapeseed oil and the glucosinolate content of rapemeal to produce the current double lows.

These varieties produce an oil suited to high-temperature frying for fast-food outlets such as McDonald’s and Kentucky Fried Chicken and they allow the oil to compete better with sunflower.

“I think eventually the whole market will move to these HO,LL varieties,” says Mr Clarke.