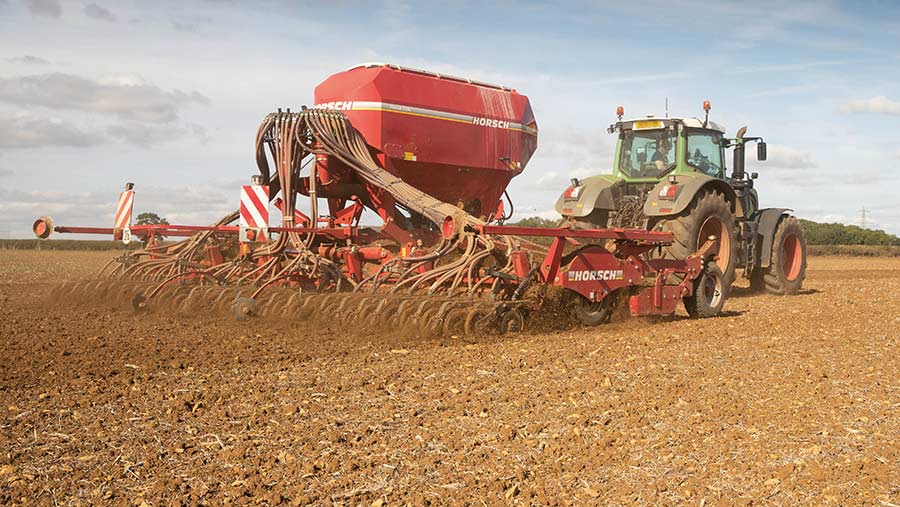 Winter wheat varieties that do not expose farming businesses to any more risk are in demand ahead of this autumn, as growers deal with the combination of market volatility and inflationary pressures.

Understanding how much needs to be spent on them to achieve good results is a key consideration, especially with Group 1 and 2 milling varieties and where disease resistance ratings are coming under pressure.

See also: A guide to which OSR varieties to grow next season

While the nitrogen price is known, agrochemical inflation is expected to be 10-15% in 2023, meaning that the difference in fungicide costs between a “clean” and “dirty” variety could be as much as £50/ha (see table).

With this in mind, and as grain markets continue their rollercoaster ride, the risks of getting it wrong are much greater.

Sticking with varieties that have been grown before, rather than move to new, but lesser-known, choices, will be the right strategy for many.

Where changes are necessary, among the line-up for this autumn are 10 new varieties – two in the Group 2 sector, three soft Group 3s and five feed varieties – two of which are soft and three are hard endosperm types.

With no newcomers for this year and none on the horizon either, the Group 1 varieties are causing the most concern with their additional fertiliser and fungicide requirements.

High levels of yellow rust in both Zyatt and Skyfall are proving to be a deterrent, says Niab cereal varieties specialist Clare Leaman, who acknowledges the difficult choices that milling wheat growers are facing.

“The risk factor has multiplied,” she says. “We’ve seen renewed uptake of Crusoe grown as a first wheat as a result of disease susceptibility, despite its weakness to brown rust, and I expect that some will look at the Group 2 sector instead.”

Fears about the future of tebuconazole supplies are also relevant, along with the high cost climate and poor success rate of achieving full milling specification, she notes.

Duncan Durno of Openfield agrees and points out that Crusoe has good end-user support and is the most efficient at building grain protein, although he highlights that Zyatt is the highest yielding in this category and makes a good second wheat.

Illustrious is another option for milling, he suggests, but it must be drilled early with a 10-15% increase in seed rate, as well as early nitrogen to maintain tillers.

Skyfall is still a good second wheat option and remains popular with growers, many of whom do not grow it for milling, note commentators.

Much will depend on what the millers decide to do as to whether Group 2 varieties gain ground in such uncertain times.

With two newcomers – Palladium from KWS and Mayflower from Elsoms – there is more choice in a sector that is dominated by Extase, with its 15% market share.

Growers have learned that they mustn’t drill Extase too early, says Mrs Leaman, who stresses that it is a very vigorous type with early maturity.

“It is grown for its better disease resistance and it has allowed growers to take some costs out,” she notes. “But it does give a response to appropriate fungicide use and the genetics need looking after.”

Mr Durno believes that Extase came along at the right time and although some yellow rust has been seen in it this year, its better disease scores are appealing to growers.

He adds that more millers are looking at it for 13% protein, with both Heygates and ADM in the running.

New addition Palladium is interesting for a few reasons, says Mrs Leaman, who highlights its high Hagberg of 315 and a good set of agronomic scores, including a one-year septoria rating of 7.2.

“At 100%, it’s only just behind Extase on yield and is also early to mature. It’s also shorter and stiffer, so can be drilled earlier.”

Mayflower from Elsoms also has a very strong disease package, including a one-year 8.2 rating for septoria, but is slightly lower yielding at 97%.

However, seed availability of Mayflower is extremely limited in its first commercial year, reports the seed trade.

There are too many Group 3 varieties in a sector that is losing ground and only expected to account for just over 6% of the market next year, believes Ron Granger, arable technical manager at Limagrain.

While there are three new additions in the group of 10, they don’t appear to add much to the existing choices and most of them are Cougar derivatives, which means their septoria resistance has to be monitored.

Mrs Leaman points out that growers’ expectations have changed and they are looking for a combination of characteristics including better disease resistance, which is why the latest additions to the list aren’t creating much excitement.

The highest yielding is newcomer Guium, on 102%, with another debutante Brium on 100%. Both are later maturing and have septoria scores of 5.0 and 5.6, respectively.

The third is Rashid, which has the best septoria score of the three, with a one-year rating of 6.4, and a yield of 100%. It also has the best resistance to lodging ratings, but is late to mature.

“Of all of the Group 3s, Astronomer has the highest septoria resistance and also has the best untreated yield figure,” she says.

“It came on to the list in 2021 and although it did have a scare following the septoria explosion last year, it is attracting a following for its complete package.”

There are two new soft Group 4 feed varieties and three new hard feed types to consider for this autumn, with plenty of interest being shown in them with wheat prices at near record levels.

In the soft Group 4 category, Bairstow and Stokes, on 103% and 102%, are new high-yielding, later-maturing varieties, of a similar height to Skyscraper and with suitability for distilling.

They are up against established choice Skyscraper, which remains one of the top five varieties in terms of seed sales, despite its susceptibility to septoria and need for a robust plant growth regulator programme.

“Skyscraper fits everywhere and has performed well on-farm,” comments Mr Durno. “It’s the biggest selling variety in Scotland, as well as being popular in England for its big grain.”

The arrival of Champion and Dawsum as new hard feed varieties has seen yields taken on and some disease resistance improvements, while Typhoon is another strong contender, albeit with a slightly lower yield.

The popular existing hard feed choices are also still holding up, says Mr Durno, who expects sales of stalwart varieties such as Graham and Costello to continue, as they are valued for their reliability and consistency.

“We are seeing varieties such as Gleam and Insitor taking some yellow rust now, so they may lose a bit of market share, but they’ve done well on-farm for many.”

Champion from DSV heads the list on a yield of 106% and should be targeted at October drilling dates, he suggests, as it has weaker straw than some.

A one-year septoria rating of 8.0 is very welcome and rewards the hard work that breeders are putting into genetic resistance.

Mrs Leaman predicts that Champion will work well for the growers who understand what they are taking on, suggesting that it has a place as a second wheat.

She adds that it would make a good partner for the other new variety, Dawsum, which has a yield of 104% and a better specific weight of 79.4kg/hl, but doesn’t have orange wheat blossom midge resistance.

Dawsum’s one-year septoria rating of 6.1 isn’t as good as the other new additions, she notes, but it looks to be a good choice as a first wheat and has an all-round package which gives it a very high untreated yield of 92%.

“Dawsum is a Costello/Kerrin cross,” says Mr Durno. “It has given its best yields in the north and west regions and looks as though it will be a flexible choice.”

Typhoon joins the list on a yield of 102% – behind the other two but with characteristics that will appeal, including good tillering ability and a slow speed of development.

Described by some as a dark horse, it has a lower Hagberg of 169.

“The three new hard Group 4s will change the set-up, as they do bring benefits over current choices,” summarises Mrs Leaman.

There are 12 candidate winter wheat varieties being assessed to see whether they will join the Recommended List at the end of the year.

For Clare Leaman of NIAB, it isn’t yet apparent whether they are a progression from current choices or have enough to offer to persuade growers to move on.

With no new Group 1s, the three potential bread-making varieties – Zinzan, Ultimatum and Wrenum – are all considered to be Group 2 quality, while the two Group 3 candidates, Wilkinson and Gefion, don’t appear to have either the yield or disease resistance advantages that are needed.

“Obviously it’s still early days and things can change,” she says. “But given the background of rising costs and reducing BPS payments, growers want to see varieties that help them to increase their returns and reduce their growing costs.”

There are four soft feed varieties and three hard types, she continues. “Redwald is very high yielding and has a good untreated yield figure, but comes with a lower specific weight and will get some yellow rust.

“Some of the others don’t quite have the disease resistance ratings that growers want to see now.”

“The question for me is whether they are any better than the ones that joined the list this year and are now in the market. They are a year ahead.”

Suffolk grower David Pettit has already decided to alter his winter wheat variety line-up this autumn, as he gradually replaces choices that are beginning to look a bit tired.

Variety selection involves much more detail than it used to, he admits, with the untreated yield figure and disease resistance ratings holding much more sway now and local trial results also helping with his decisions.

“There was a time when we just looked at yield and how much we could get from a variety,” says Mr Pettit. “That’s changed considerably, as have the sources of information we use.”

This year, he has Skyfall as a second wheat, with hard feed types Gleam and Shabras also in the ground.

Having moved away from soft wheats to the hard feed varieties, he is now considering their re-introduction and plans to grow Group 3 choice Astronomer as a first wheat in 2023. 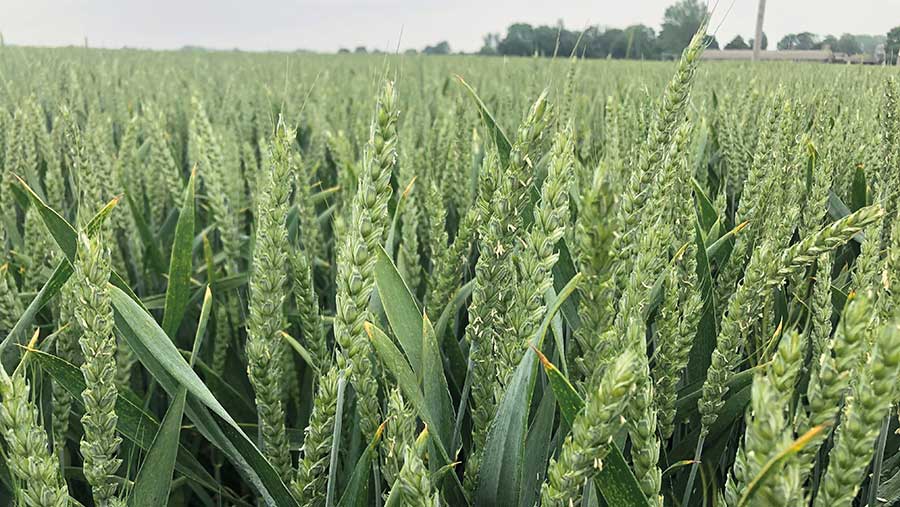 “I’m hoping that Astronomer will take over from Gleam,” he adds.

“It has better lodging, yellow rust and septoria scores, although I will be keeping a close eye on any septoria due to the variety having Cougar in its parentage and the issues that caused last year.”

He usually starts drilling in the last week of September and then continues throughout October, delaying the fields where blackgrass is an issue.

Growing wheat, sugar beet and spring linseed at West Hall Farm, Rickinghall, Mr Pettit has also made the decision to bring oilseed rape back into the rotation for 2023 and has opted for a high erucic acid variety, which he plans to drill in early August.

“We find that wheat yields can be as much as 2t/ha higher after oilseed rape,” he reports.

“A wider rotation means that 10% of the farm will be down to oilseed rape – we moved away from it for a couple of years and have been using spring linseed in its place.”