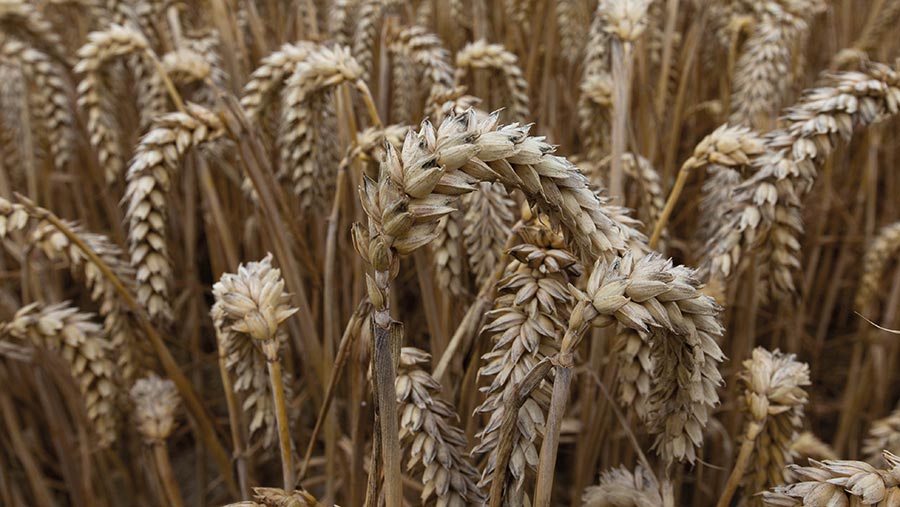 Biscuit wheats have been a central part of the rotation at EG Hadingham & Sons for many years, where they have performed consistently and provided premium earning opportunities.

In most seasons, Group 3 wheats have yielded as well as any Group 4 feed varieties being grown, met the biscuit specification and been suitable for the export market – something which the Halesworth-based business is well situated to take advantage of.

While being close to the port at Ipswich gives marketing flexibility, the domestic market for Group 3s also remains buoyant as the unique protein quality produced by these soft varieties is needed for a range of flour types.

With that in mind, grower Ed Hadingham is taking a look with a small area of one of the new Group 3 wheats this year, as he assesses whether Astronomer will replace his current variety and earn a place on the farm in future years.

He points out that Group 3 varieties have proved more reliable than Group 1 and 2 breadmaking types on the farm’s sandy clay loam soils, as the latter didn’t always make the grade when they were part of the system.

“Biscuit wheats have always given us comparable yields to Group 4s as well as the required quality,” he says.

“We’ve moved away from breadmaking varieties and now concentrate on a market sector that has been more rewarding.”

The biscuit premium has varied over time, with Mr Hadingham setting a minimum target of £5/t.

Higher levels were achieved in 2020, as there was strong demand after the disappointing 2020 harvest.

With pigs on the farm as well as combinable crops and sugar beet, the family partnership grows soft Group 3s and 4s – with Firefly, Saki and Beluga – as well as an area of the hard feed wheats, Graham and Kerrin, currently in the ground.

Over the years, Consort, Claire, Invicta, Zulu, Elicit and Firefly have been produced as biscuit wheats – with the latter being grown this year. Whether that stays or is replaced by Astronomer remains to be seen.

His agronomist, Dan Robinson of Agrivice Farmacy, points out that later-maturing varieties are less suitable for the farm, as grain quality tends to suffer if harvest gets delayed by the weather.

“There was a time when there were too many later-maturing varieties on the Recommended List – fortunately, that’s changed now.”

At the same time, he stresses that disease resistance is becoming increasingly important, with more resilient varieties being favoured over those with obvious weaknesses, especially while the yellow rust situation remains so fluid.

On paper, Astronomer has a better disease package than Firefly, with 9s for both yellow and brown rust and a 7.4 for septoria.

That compares favourably, as Firefly has been taking on more rust in the past two years, with its yellow rust rating dropping.

Astronomer also has the highest specific weight in the Group 3 category of 77.8kg/hl.

In terms of yield, the two varieties are on a par with a UK yield of 101%, both offering slightly more in the East at 102%.

In the three years of testing, it has been consistent in providing the extensibility needed for biscuit manufacture.

“We look forward to introducing it to our grist,” he says.

“The unknown with all new varieties is how they will perform on individual farm sites across different seasons,” continues Mr Hadingham.

“For this reason, we are assessing Astronomer now with a view to growing more of it in 2022.”

The soft Group 4 wheat Beluga has always done well at Western Farm, St James, with Mr Hadingham highlighting its sought-after combination of early maturity and high specific weight. “At harvest, it’s the first variety to be combined straight after the oilseed rape.

“Those characteristics are what we keep looking for in any newcomers.”

On the farm, wheat drilling dates have been pushed back for the past two years, to allow time for stale seed-beds, with Mr Hadingham aiming for the first half of October if blackgrass is under control.

Seed rates are adjusted according to the conditions, with wheat being grown in a six-year rotation that also includes oilseed rape, vining peas, sugar beet and spring barley.

Later drilling dates have had the added bonus of reduced disease pressure, but this year’s policy to use two SDHI-based sprays at T1 and T2 is expected to pay off, with high yield potential and good grain values on the cards.

Nitrogen is applied according to yield potential and previous cropping, with three splits used in most years and leaf analysis employed to guide micronutrient use.

Limagrain has four new Group 3 winter wheat varieties on the latest Recommended List, although one of them, Quasar, will not be taken any further and there is no seed available.

In addition, Elsoms has a newcomer, Merit, which has the same UK yield as Astronomer and the widest range of marketing options, including export potential.

Merit was specifically recommended for the East, where it has a slightly higher yield of 103%.

Tom Barker, cereals and pulses product manager at Limagrain, says that Astronomer will be widely available this autumn, having been well received by the seed trade.

“It has the all-round package of grain quality, disease resistance and yield potential,” he says. “It can also be drilled early, if required.”

Otherwise, Prince is the highest yielding of the Limagrain group and sits at the top of the Group 3s, on 103%. Suitable for biscuit-making and distilling, it is slightly later to mature on +2.

Illuminate offers a UK yield of 102% and has been earmarked for the North, thanks to its early-drilling performance and suitability for distilling.

“There’s already been a resurgence in biscuit wheats, but the arrival of so many good new varieties is likely to give the sector another boost,” says Mr Barker.