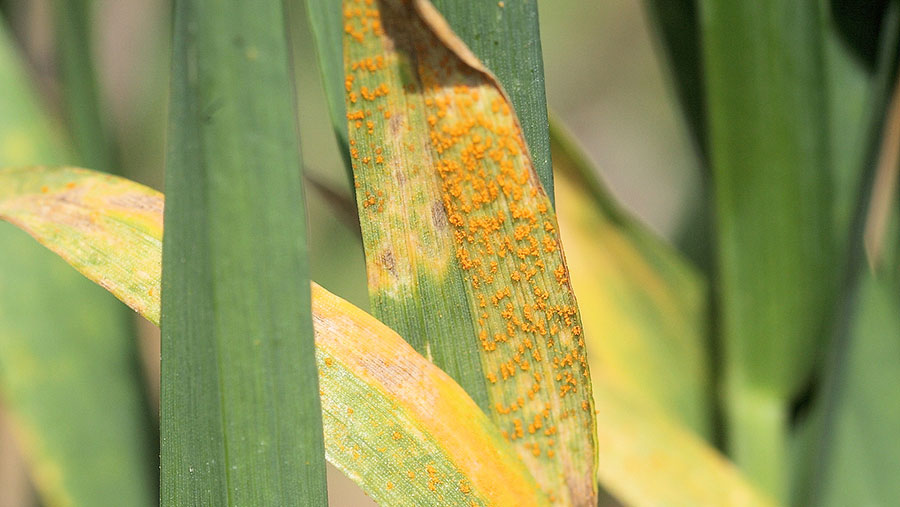 A network of early warning sites suggests that yellow rust is overcoming genetic resistance inherited from a key wheat parent, affecting a number of popular varieties.

This spring saw several reports of the disease being unexpectedly seen in some varieties, despite having respectable disease scores.

It led to warnings back in June, ahead of the Cereals event, of a possible new rust race affecting many current varieties.

However, it wasn’t a surprise for Agrii, as there were already signs that some varieties were not behaving as might be expected in its tussock trials across the country.

”We saw an unexpectedly high level of yellow rust on Hereford at one site.”

In 2018, the increased susceptibility was seen across half the 12 tussock sites, and this year changes were also seen in the related variety Shabras.

“It looks like Hereford resistance is losing its effectiveness and we have seen this trend developing over the past three years at a substantial range of sites.”

Looking at other varieties with Hereford parentage in parallel national and regional variety trials, Agrii’s head of agronomy Colin Lloyd says a marked fall in yellow rust ratings has also been recorded in KWS Zyatt, Gleam and Dunston.

For example, the Agrii yellow rust rating for KWS Zyatt has fallen from 5.4 at the start of this season to its current rating of 3.7. Dunston has seen a greater fall of 2.8 points.

Dr Bayles says it is still too early to say if it is a new race. “The changes we are seeing could be due to an existing race that has simply become more widespread as these varieties [with Hereford parentage] are grown more widely.”

However, not all varieties with Hereford parentage are affected.

LG Sundance has Hereford as a parent, but it is still holding up well, she says. It may have inherited its yellow rust resistance genes from its other parent, Cassius.

Mr Lloyd stresses that this change doesn’t make them poor varieties. It’s more about adjusting their agronomy and being aware of the risk.

He points to Crusoe, which despite its brown rust weakness is still being grown successfully with the right chemistry.

“Growers know how to grow it and appreciate they have to manage its brown rust risk.”

One way to manage the risk is by growing a range of varieties with different parentage and pathology ratings.

Agrii produces a yellow rust diversification chart, similar to the one that used to be published by the UK Cereal Pathogen Virulence Survey (UKCPVS).

Varieties are also are given a pathology rating, either Group 1 (resistance still holding up), Group 2 (seems to be slipping to some races) or Group 3 (susceptible to current races).

“The idea is not to put all your eggs in one basket and aim for more diverse genetics,” says Mr Lloyd.

For example, don’t grow Dunston or Gleam with Shabras or KWS Zyatt, as all are in the Hereford parent group.

“Instead, grow them with varieties in other parentage groups.”

He points to Graham, which has proved to be a good first wheat, while Gleam has done well as a second wheat.

“Having them both in a rotation works well and means lower risk from greater genetic diversity than growing Gleam alongside Dunston.

Other ways farmers can manage yellow rust risk is not to drill too early, as later drilling can help bolster disease ratings.

“Our trials show that drilling four weeks later is typically equivalent to increasing the disease score of a variety by one point,” Mr Lloyd says.

Hereford was a candidate wheat variety that never made it on to the AHDB Recommended List in 2008.

The variety had poor brown rust resistance and weak straw, which outweighed its barn-filling potential.

However, it has been used by breeders for its valuable yellow rust resistance genes, which are now present in a number of varieties on the Recommended List.

At T0, consider using an azole to keep a lid on rusts early in the season. Strobilurins also have a valuable role in managing yellow rust.

With this year’s dry spring, there was some talk of not needing a T0, which can be risky.

“While varietal resistance is a useful tool, relying on it to keep a lid on disease until later spray timings could get you in trouble,” says Mr Lloyd.

If farmers are looking to adopt a low fungicide input approach, they need to have a good understanding of what genetics they are using or it could prove costly.

What about brown rust?

The brown rust rating for KWS Firefly has also slipped noticeably, according to Agrii tussock trialling.

However, Colin Lloyd says it is still a useful variety offering good straw strength and with a good septoria rating.

He says it’s a bit like Crusoe, which is known to be weaker on brown rust, yet growers have still been able to achieve high yields with the right fungicide programme.

“KWS Firefly will stay clean with the right chemistry and we have seen no problems with it this season.”

Good crop monitoring is also important and Dr Bayles points out that growers should not assume that early signs of the disease necessarily mean resistance has broken down.

Some of the reports this spring were clearly down to rust appearing before adult resistance had taken effect.

“Graham can express yellow rust early before adult resistance kicks in, which then will give protection it from the disease,” says Mr Lloyd.

If you are seeing the disease after growth stage 31/32 when adult resistance should have kicked in, then you know you are in trouble, adds Dr Bayles.

Tussock trials at a glance 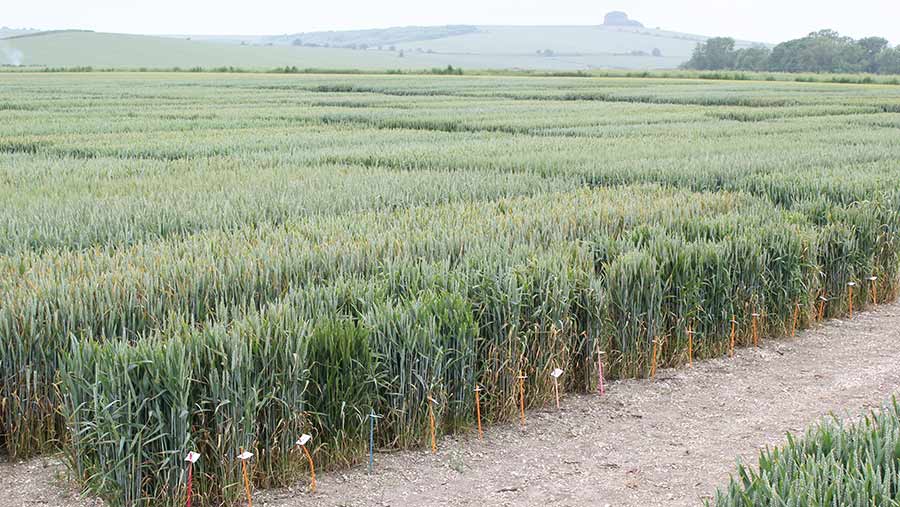 Agrii’s tussock trials monitor a range of key varieties for any changes in the virulence of yellow and brown rusts, acting as an early warning of varietal breakdowns.

Independent consultant pathologist, Rosemary Bayles who co-ordinates them highlights that in any field that there are likely to be several different races of rust present.

These races will adapt to the varieties grown and over time, they gradually overcome resistance. That’s why continual monitoring is so valuable to detect any early signs that varietal resistance is being overcome.

There are 12 sites across the UK, including traditional rust hotspot areas like East Anglia, and into Wales and Scotland.

The tussocks (mini-plots resembling tussocks of grass) contain nearly 30 varieties, including those recognised as carrying the most valuable sources of yellow and brown rust resistance.

“Our aim is to have as wide range of genetics as possible, including a selection of common parents to see what is happening,” says Dr Bayles.

By monitoring as many parental combinations as possible, the Agrii R&D team can get an indication of how vulnerable current and upcoming varieties are to current rust races.

It can also compare between years to spot any trends – for example certain varieties becoming more susceptible or showing susceptibility for the first time.

“With the tussock trials, we see can changes one to two years before they are confirmed by the UK Cereal Pathogen Virulence Survey (UKCPVS),” Dr Bayles notes.

“Then the UKCPVS does the science to explain why it has happened, which is important for breeders.”

A good example is JB Diego’s breakdown to yellow rust, which was only initially apparent on one site.

“We were able to advise farmers to keep a closer eye on this variety ahead of time,” recalls Agrii head of agronomy Colin Lloyd. “Next season it went belly up.”