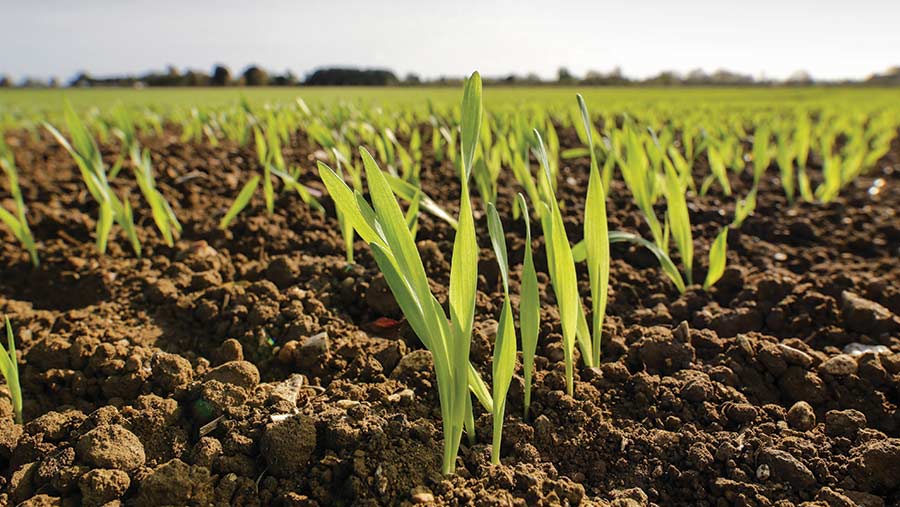 A dual-purpose spring barley variety with very high yields is tipped for success in 2020, having almost completed its probation period with end users.

LG Diablo, which was first recommended in 2018, achieved full approval for distilling in 2019 and is on course to get its brewing stripes later this year.

As with all new spring barleys destined for malting, Diablo came in under the radar, says Clare Leaman, cereals specialist with Niab Tag. She points out that there is always a time lag between recommendation and market uptake with these types.

“Diablo got its full approval for distilling in June 2019 and moved to its second year of provisional approval for brewing in the MBC system at the same time,” she says.

“So it is progressing through the testing regime as expected, with just a bit of additional data required for it to clear the final hurdle.”

Brewing approval is always based on the quantity of results from malting tests, so firm final decisions aren’t made by the industry until there is enough data to consider, she says.

“That leaves newly recommended varieties in limbo for a bit. The market is driven by end users and they’re often reluctant to move on from varieties they know and like.”

Another four spring barley varieties with potential for malting were added to the latest Recommended List last month – although all are still to go through the testing regime that determines their uptake by the end user.

Of the four, Tungsten from Syngenta is the only dual-purpose type, with a UK yield of 105% and better performance in the North, where it matches Diablo on 107%. It has also done well in the West on 105%.

Otherwise, brewing type Splendor from Syngenta and malt distilling variety Firefoxx from Elsoms Ackermann have been recommended, as has lower-yielding Iconic, which has been recommended for the west region.

Two new feed varieties, Fairway and Prospect, have also joined the list. They are now the only two feed varieties to be recommended

Rhynchosporium ratings on the latest Recommended List shouldn’t be given too much weight, as they are based on limited data.

Where Diablo has an advantage is that it is a very high-yielding variety and has given its best performance in the North, with a yield of 107%, which makes it an obvious choice if you are growing for the distilling market, says Mrs Leaman.

“It offers the highest yields in the North and is 2% above Laureate, which is another dual-purpose variety and the current favourite in terms of market share. It’s always good to have more than one variety to choose from and to see progression.”

Diablo has also given good results in the east of the country, so getting full approval for brewing could see it gain a foothold in this region – another key malting barley-growing area.

It is slightly later than Laureate and the other popular brewing variety, Planet, but Mrs Leaman considers this is unlikely to be an issue unless a very large area is being grown.

“Otherwise, it has a strong agronomic package. None of the spring malting barleys are very good on rhynchosporium, so Diablo’s score of 5 is typical of this group.”

The versatility of dual-purpose varieties is appreciated by growers, says Ron Granger, arable technical manager at Limagrain, and shows why other choices such as Concerto and Laureate have done so well.

“The industry has pushed for these types. And while Laureate is dominating the market at the moment, Concerto’s reign is declining. It means there’s room for up-and-coming Diablo.”

That’s good news, because there was plenty of seed available – enough for Diablo to take a 16% market share in 2020, a big jump from its current 3%, reports his colleague Matt Shand.

“It has already replaced Concerto, so will now be an alternative to Laureate. We’ve seen Scottish growers start moving to Diablo in numbers, as it’s the highest-yielding variety with approval for distilling.”

The timing is right too – spring barley could be a key crop for the UK this year, following dismal autumn weather and restricted plantings of winter crops, says Mr Shand.

“It has stiff straw, low grain nitrogen and a high alcohol yield. So we’re expecting big things from it this year and beyond, both in Scotland and England.”