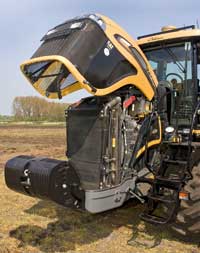 Come autumn and spring-drilling time, the countryside hums with the seductively throaty roar of Challengers working thousands of acres the length and breadth of Britain.

True, it’s probably not to everyone’s taste, and says Challenger, the 79dB (A) engine noise is the next thing to be tackled on the list. But, in the shadow of British Sugar’s beet factory in Ely, it’s quite therapeutic. For this is the new MT765C model; more refined and with enough bells and whistles to satisfy even a Pearly King or Queen.

The belt has got beefier and features an extreme belt carcass with an arrangement of steel cables in a grid formation. This not only protects tracks from stone damage, but also gives the stones somewhere to go (in between the grid).

Those buying a 700C series will have the option of six widths and four types of track. Added to this, there will also be the choice of two idlers, three mid-wheels and three driver widths. But for most, the general Ag belt will be sufficient.

Like the B-series, the track is allowed to follow the contours, and the suspended mid-wheels mould to the ground surface for constant traction over uneven terrain. Optional are polyurethane mid-wheels for tougher environments: Challengers are sold from Antarctica to the Middle East.

Round the front, stronger, sleeker markings give the C range an almost eerie sneer, while new rivet-shaped headlamps claim to be 20% brighter.

Over half of all Challengers sold are equipped with AutoGuide, parent company Agco’s own system. Since their collaboration with TopCom, we can expect quite a few fancy editions in the near future, including the integration of the system into the display unit, rather than the button approach on the previous models, which Challenger says will come before the end of the year.

When it does become integrated, it’ll work in pretty much the same way as the system on the B range. Select the AutoGuide function on the TMC, determine the implement width, set a virtual marker and cast a land in the direction you want to cultivate or drill. When you have completed the bout, register the next virtual marker and bingo – your straight line is set.

Overall, despite its 340hp, gentle handling will see it turn reasonably sharply for a machine that has a 2400mm wheelbase. But as with all Challengers, it’s a case of softly, softly.

Pulling a seven-leg Cousins subsoiler, set at about 35cm (14in), it was difficult to get the Challenger to so much as grunt in the loamy Cambridgeshire soil of potato and arable grower, Bill Legge’s farm. He’s already got a MT765B Challenger and is looking to upgrade.

The one-piece, gas-strut-assisted, tilt-up bonnet opens from the front, giving easy access to key service points, and things like the oil levels and refill can be done at operator level.

By ironing out some of the clunkiness of the operating system and giving the cab a spring clean, Challenger has come up with a far more sophisticated driving experience for the operator. The integration of TopComs autoguide system into the TMC system will complete the transformation and make things a lot easier.

Testament to the popularity of the Challenger as a workhorse, the new range seems to be selling well, with more than 25 being delivered to farms so far.