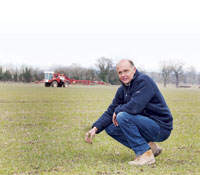 Peter Sands keeps his options open on the 1500ha he farms in partnership with his parents at Ivy Dene, Brewood, Staffordshire by having two cultivation systems and kit to apply both liquid and granular fertilisers.

“We used to be entirely liquid fertiliser, but high prices last year pushed us to apply more granular product – all P&K applied this year will be solid and nitrogen will be half liquid and half granular.”

Two Bateman self-propelled sprayers apply the product via Hypro six-jet nozzles, he says. “We used to use dribble bars, but we found they got knocked off easily.”

Liquid ammonium sulphate is being applied to oilseed rape, second wheats and barley. “I think the first two applications will be liquid and then we’ll switch to granular.”

Cropping is kept simple and overheads reduced by sticking to feed wheat varieties, he says. “It’s easy to manage, it can all go in one pile and it’s much quicker to put it through the drier.”

The main rotation is first wheat followed by second wheat then oilseed rape, but he’s starting to add winter barley into the cropping. “I want to grow oilseed rape one in four years to avoid build-up of soil-borne diseases, such as club root.”

Land capable of growing oats is followed with wheat, then oilseed rape, returning to wheat in the fourth year.

The farm is blackgrass-free apart from an isolated 8ha field, which he is managing to contain. Atlantis (mesosulfuron + iodosulfuron) will be applied as soon as soil temperatures are warm enough, he says. “And we’re also going to try Broadway Star (pyroxsulam + florsulam) on some troublesome brome.”

Othello (mesosulfuron + iodosulfuron + diflufenican) is going to be applied on 80ha of wheat once there is active growth and Fox (bifenox) is about to go on a small patch of oilseed rape to control some persistent runch, he says.

His adviser is AICC agronomist and Crop Watch reporter Bryce Rham who looks after most crops. But Mr Sands is BASIS-trained and does his own oilseed rape agronomy to keep costs down. Agrochemicals are sourced through Mr Rham’s buying group, Farmadvisors, he says. “They buy well and they’ve helped reduce my chemical bill.”

Horsepower is modest for the area farmed with a 250hp John Deere 7930 taking care of cultivation and drilling duties and three sub-150hp machines for general tasks. “I prefer to hire in tractors as I need them – it seems ridiculous to have an expensive machine sitting in the shed.”


Field sizes average just under 10ha so the 10.5m (35ft) header on the farm’s Claas Lexion 600 Terra Trac combine is taken on and off regularly. Despite this it will devour 60ha a day leaving the 15t chaser bin driver and five “corn-carters” struggling to keep up, he says. “It’s a fantastic machine and a massive step up from the 580 we had before, but we did have an engine blow up last year.”

Tracks were chosen over wheels as they were narrower and easier to take down the road. “They also help limit compaction, but you can still see where it’s been in the following crop.”

He’s adding a second-hand 7.5m (25ft) cut Claas Lexion 570 to the fleet this summer which will take care of contract work and the ground closest to the farm.

All straw is sold in the swath as it interferes with the minimum tillage system, he says. “As long as I get the cost of the fertiliser back I’m happy.”

Sewage sludge from Wolverhampton is bought in to build up organic matter and boost phosphate indices. “We’ve got 10,000t coming this year which costs £2/t delivered and spread.”

This provides enough phosphate for three years’ cropping and, if lime has been added to dry the sewage, it takes care of pH, too, he says.

He employs three full-time staff including two sprayer operators and a general tractor driver and brings in five casual workers at peak times.

Establishment costs, including spraying and combining, are £250/ha for both plough and minimum tillage systems, he says. “Min-till is quicker, but isn’t any cheaper as the ground is easy to plough and herbicide inputs on min-till add up.”

A small quantity of wheat is sold forward before harvest and a third is traded between September and Christmas. “We then sell some every month to keep the money coming in – I also put 500t in the Frontier pool, which tends to do quite well.”

Most barley is sold forward along with 1t/acre of oilseed rape for harvest and November movement, he says.

Another redundant building is used for caravan storage and somesmall units are let as workshops. A sawmill run by his father cuts oak beams using timber from local merchants and produces fencing posts from softwood sourced through the Forestry Commission. “It has really helped the business at tough times.”

He’s looking to expand the business, but an attempt to purchase neighbouring land was thwarted when it went for £19,800/ha (£8000/acre).

Peter Sands farms 1500ha north of Wolverhampton at Brewood. He owns 285ha, the rest is rented and he does contract spraying and combining on a further 125ha. All ground is within seven miles of the holding. A quarter of the farm’s soils are medium to heavy, with the rest easy-working sandy loams.

Peter Sands follows two cultivation techniques with one-third of the farm sown using a conventional plough-based system. A Lemken six-furrow plough is followed by a Solitaire 4m folding disc drill straight into the furrows. “The ground is easy working so we don’t need to work in-between.”

The rest is established using one of his min-till systems. The farm’s 3m Simba DTX or 3m Sumo Trio take care of primary cultivation followed directly with a 6m Horsch Pronto drill.

Oilseed rape on lighter ground is established with an Opico band seeder mounted on the Sumo trio, while heavier soils are drilled with the Horsch Pronto.

But both the Simba and Sumo machines have their limitations, he says. “The roller on the Sumo can pack the ground too hard leaving it like concrete and the Simba doesn’t break the soil down sufficiently to get a seed-bed directly behind.”

Rolling between cultivation and drilling helps create a viable seed-bed, but he’s hoping the 4m Knight C-Type demonstrator currently on-farm will do the job in one pass.

The £35,000 machine weights 7t and has a set of discs, followed by shallow tines, another set of discs and a heavy duty double packer roller, he says. “I like the double packer as it does a great job breaking up clods.”

If it continues to perform, he hopes to have the 5m version ready for autumn planting and will hire a tracked John Deere to pull it. The 250hp John Deere 7930 can just about pull the 4m demonstrator on light ground, he says.

Additional tractors are hired as required

Bateman RB26 and RB16, both on 24m booms and set up for liquid fertiliser