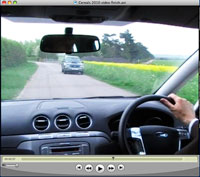 Test runs from each of the three Cereals 2010 park-and-ride sites suggest visitors to this year’s event should expect the journey to take less than 20 minutes.

Previous Cereals events have been plagued by traffic chaos prompting organisers Haymarket to spend £100,000 on a park-and-ride scheme, which hasn’t been universally well accepted.

The concern over how long journeys from the park-and-ride sites to the event, at Chrishall Grange near Royston, might take during rush-hour traffic led Farmers Weekly to test drive the route last week.

Travelling at about the speed buses will travel at all times, journeys from each of the three sites to the showground lasted eight, 12 and 16 minutes respectively.

Event director Jon Day, who took part in the Farmers Weekly trial, was delighted with the results.

He spoke to Farmers Weekly:

“We have shown that you can get on to the Cereals site in less than 20 minutes from all of the park-and-ride sites,” he said.

Buses from the three sites, west, north and east/south of the event site, will run from 6.30am until 7.30pm.

Mr Day said visitors could expect to be waiting around five minutes during peak times and 20 minutes off-peak for a bus ride.

“We want buses waiting and not visitors queuing,” he said.

Car park sites have been selected to take traffic from the eastbound A505, the southbound M11 and westbound A505 and will be open from 6.30am until 7.30pm.

Visitors will be allowed into the event earlier than previous years with access from 7am to help avoid peak commuter traffic.

Mr Day said any coaches and minibuses carrying 10 people or more would be allowed on to the Cereals site.

However, there will be no visitor car parking on-site on the day. Anyone who arrives at the farm in their own car would be turned away, he said.