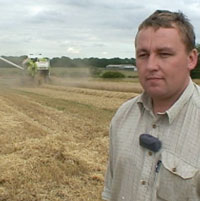 “We’ve been running a six-walker Lexion 560 and wanted to go rotary, but a Lexion 570 was a step too far,” says Matthew Bowe, of Denham Estates near Bury St Edmunds.

So, having heard about the Tucano 480, they were one of the first to have a pre-production model on farm.

Fitted with a 9m Vario header, throughput seems comparable to that of the 560 so far, he reckons. “If you want chopping capacity and throughput, rotary is the way forward,” he adds.

Because the combine’s only been in barley, both 650 and 850 rotor speeds have been set so far. “Sieve losses seem low, but because we’re baling the barley straw, getting the correct rotor speeds is going to take a little fine tuning. It would be better if these were variable rather than fixed, though.”

“Inside, there are all the functions you would expect from a larger combine, and maintenance is straightforward.

“I’d like to see the Tucano against the Lexion 580, especially as the Tucano isn’t likely to be Lexion money, and if it continues like this, it’ll be worth considering.”