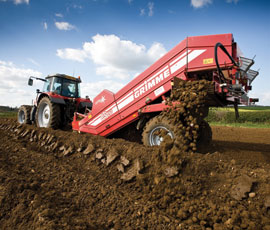 The month of June looks set to continue the trend of wet weather, which is keeping conditions ideal for the development of disease in cereals, prompting our Crop Watch agronomists to plan a robust T3.

In the south, Nick Brown from ProCam has seen septoria infected flag leaves in wheat crops where spray programmes were disrupted. “There is also 50% infection on leaf two and leaf three is totally defoliated,” he explains.

“With such high disease pressure the decision to apply an ear wash to top up septoria control and combat fusarium and sooty moulds was a no brainer.”

This is also the case up in Yorkshire, where AICC agronomist Patrick Stephenson has seen the new SDHI fungicides really tested this year for the first time. “At last the manufacturer’s claims for the efficacy of these products can be assessed,” he points out.

Winter beans are providing the two with a conflict of opinion, with Mr Stephenson having some very healthy looking crops. However, further south chocolate spot is proving a difficult disease to control.

“Spring crops will get a second fungicide in the next week or so. Since the onset of pod set we have not had conditions suitable for Bruchid Beetle but if it warms up then an insecticide will also be applied to minimise crop damage,” he adds.

In Cambridgeshire the heavy wind and rain have battered crops and causing them to lean, with the worse affected crops being winter barley and oilseed rape. “Much of this seems to be root lodging, where wet soils have lost their strength and have not been able to resist the leverage of the heavy canopies,” says Agrii agronomist Will Foss.

Mr Foss is already formulating his grass weed control strategies for next year, carried out on a field-by-field basis to drive down starting populations.

“Stale seed-beds can be very successful if there is sufficient rainfall to germinate a high proportion of weed seed, but as this approach is reliant on the weather it is much more of a gamble,” he says.

“Stale seed-beds can be very successful if there is sufficient rainfall to germinate a high proportion of weed seed, but as this approach is reliant on the weather it is much more of a gamble.”
Will Foss

He points out that delaying drilling can perhaps have the biggest influence on populations in the right year. “We may need to adopt a much more flexible approach, meaning that drilling should be delayed until we are confident that a large percentage of the grassweeds have germinated and been sprayed off.

“However, this may mean delaying drilling until spring,” adds Mr Foss.

Potato planting is almost finished, however, there is still some ware and seed crops yet to be planted in Lancashire and Yorkshire respectively, says John Sarup of Spud Agronomy.

“Most crops that have recently emerged seem to be developing rapidly, with small canopies and flower buds visible within a few weeks.

“Sunshine is needed to push a lot of these crops on, with some very pale foliage characteristics evident, and it is desperately needed to help early crops in Cheshire bulk,” says Mr Sarup.

Little potato disorder can cause poor emergence, but where emergence does occur huge variation in tuber size, dry matter and maturity can be seen. Mr Sarup has seen the disease this year in susceptible varieties.

“It is well known that varieties such as Pentland Dell and Sagitta are susceptible and growers can manage seed and planting conditions accordingly, however, I have also seen it in Arcade, Cabaret and Premiere this year,” he says.